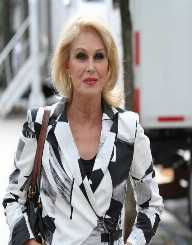 Joanna Lumley was born on May 1, 1946, in Srinagar, India. Her parents were Beatrice Rose (Weir) and James Rutherford Lumley. After India gained its independence from Britain, the Lumley family moved to England, where Joanna spent most of her life.

Joanna Lumley first attended the Mickledene School when her family first moved to England. She later transferred to St. Mary’s Convent School. She stayed there until she switched schools one last time. Joanna Lumley attended the Lucie Clayton Finishing School; she also graduated from this school.

For the first few years that Joanna Lumley was out of school, she worked as a model for various groups. This career only lasted a few years before she broke out into acting. Her first acting role was as a patient in the show Emergency-Ward 10 in 1957.

Joanna Lumley didn’t get her first major role until much later in 1969, in the movie Some Girls Do. This role did not kick off her career, though. It was not until 1976 that she gained any real fame. This was for her role in The New Avengers, a superhero sitcom. After this role, she began to appear in more movies and television shows. She even had a hand in voicing some characters in animated movies. Some of her most popular movies are listed below.

James and the Giant Peach

The Wolf of Wall Street

Throughout her film career, Joanna Lumley has won 6 awards and has been nominated for eight others. Some of her winning awards are listed below.

Outside of her film awards, Joanna Lumley has also been given two honorary degrees: one from the University of Kent and the other from the Oxford Brookes University.

Joanna Lumley was made an Officer of the British Empire, for her work on screen, in 1995.

Joanna Lumley is not only known for her work on the screen, but also her amazing charity work. She works with some different charities, which are listed below. Many of these groups deal with helping people who live in India have a better life. Lumley feels a great connection to these people, as she spent much of her childhood in India.

Joanna Lumley is also a patron of the groups listed below.

Pastoral and Environmental Network in the Horn of Africa (PENHA)

In 1967, Joanna Lumley had her first and only child, Jamie Lumley. She was a single mother at the time, but it was later revealed that long-time lover, Michael Claydon was his real father.

In 1970, Joanna Lumley married Jeremy Lloyd. The couple was only together for a few months before they divorced in the same year. Joanna Lumley started a serious relationship, but never married, Stephen Barlow in 1986.

More People From Jammu And Kashmir