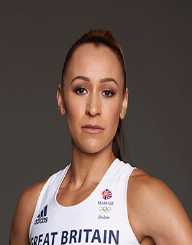 Jessica Ennis is a British athlete who has won numerous awards for her exemplary skills in sports. Aside from being an athlete, she is also an ambassadress, a columnist and has a book published under her name.

Ennis is married to Andy Hill and together, they have 2 children together. They tied the knot on May 2013 and she bore him their first born child, a son named Reggie on July 2014 followed by a daughter named Olivia who was born on September 2017.

Jessica Ennis is born on January 28, 1986, to parents Allison Powell and Vinnie Ennis in Sheffield, South Yorkshire in the United Kingdom. The older of two siblings, her younger sister is named Carmel. Athleticism runs strong in their family since her father used to do sprinting back when he was attending school while her mother did high jumps.

She first took an interest at sports when her parents took her to a track event held in Don Valley Stadium located in Sheffield back in 1996. At the event, she also met her future coach, Antonio "Toni"  Michinello, and upon being exposed to the world of sports, she immediately joined the City of Sheffield and Dearne Athletic Club when she was 11.

Ennis bagged her first win at the age of 14 at the high jump competition held by the Sheffield's National Schools Championship.

Afterward, she started competing at a variety of sports, where she joined the 1999  high jump at the pentathlon held by the English Schools AAA where she won the said category with a record of 1.70 meters. She came to media attention when she won the 2003 indoor pentathlon and 100-meter hurdles outdoor at the AAA U20 Championships. From there, she started competing on an international scale starting in Canada of the same year at the 2003 World Youth Championship and the same event the following year in Italy.

In 2005, she also competed in Lithuania at the European Athletics Juniors Championships. She became a regular household name at the sporting events but her sporting spree was put on hold when she suffered from a stress fracture in her right foot which led to her skipping the 2008 Olympic Games held in Beijing, China.

Due to her injury, she took a year-long break but came back full force a year later in 2009 at a sporting event in Glasgow where she bagged the championships at the 60-meter hurdles.

During the 2012 Olympic Games, she broke the previous record held by Jackie Joyner-Kersee's heptathlon record of 12.69 seconds to her 12.54 British record, owning the fastest recorded by a heptathlete which ultimately earned her a gold medal at the said Olympics.

Ennis put an end to her athletic career on October 13, 2016. Besides being an athlete, she authored a book, her memoir entitled Unbelievable - From My Childhood Dreams to Winning Olympic Gold. She also did a lot of charity works and served as the patron of Barrie Well's sports foundation and the Sheffield Children's Hospital.

She was also appointed at the 2017 New Year Honours as Dame Commander of the Order of the British Empire for her exemplary services in the athletics industry.