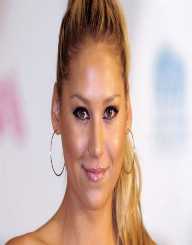 Anna Sergeyevna Kournikova was born on June 7, 1981, in Moscow, Russia. Her father Sergei was a former Greco-Roman wrestling champion and later earned a Ph.D., becoming a professor at the University of Physical Culture and Sport in Moscow. He is also a martial arts instructor there. Her mother Alla was a 400-m sprinter, but her younger brother Allan is a youth golf champion.

When Kournikova was five years old, her parents gave tennis racquet as a New Year gift. She began to play tennis two times a week when she was six, playing just for fun. At age 7, Kournikova went to a professional academy. She went to school and afterward spent all her time at the academy. In 1986, she became a member of the Spartak Tennis Club.

When Kournikova was eight years old, she began appearing in junior tournaments and the following year was attracting attention from tennis scouts across the world. At the age of ten, Kournikova signed a management deal and went to Florida to train at Nick Bollettieri’s tennis academy.

When Anna Kournikova arrived in the United States, she quickly became prominent on the tennis scene. Her first significant accomplishment was when she won the European Championships and the Italian Open Junior tournament only at 14 years of age. She also became the youngest player to win the U-18 Junior Orange Bowl tennis tournament.

The same year, Kournikova debuted in professional tennis in the Fed Cup for Russia, becoming the youngest player ever to participate and win. The following year, Kournikova won two ITF titles in Michigan and Illinois and reached her first WTA Tour doubles final.

In 1996, Anna Kournikova took on a new coach Ed Nagel, who began a six-year tenure with astonishing results. Kournikova made her grand slam debut at 15 and reached the fourth round on US Open. After the tournament, her ranking jumped from No.144 to No.69. She was also a member of the Russian delegation in the 1996 Olympic Games in Atlanta, Georgia.

Kournikova took part in 1997 Australian Open but lost in her first round. The same year, she participated at the French Open and made it to the third round. At Wimbledon, Kournikova became the second woman in the open era to reach semifinals in her Wimbledon debut. That year Kournikova lost to the champion Martina Hingis. By the end of 1997 season, Kournikova was No. 32 in the world rank.

In 1998, Anna Kournikova reached No.16 on the WTA’s top. She participated in 1998 Australian Open but lost in the third round to Martina Hingis. She also reached doubles WTA Tour final at Paris Open. During the season, Kournikova reached semifinals in singles and doubles at the German Open and made it to the fourth round at French Open. Her strong performance during the year qualified her for the 1998 WTA Tour Championships, but she lost in her first round.

In 1999 season, Kournikova won her first doubles Grand Slam title, partnering with Martina Hingis. In French Open, Kournikova reached fourth round but lost to the eventual champion Steffi Graf. That year she qualified for WTA Tour Championships but again lost in the first round. Kournikova finished her season ranking as World No. 12.

Anna Kournikova became more and more successful in doubles. She and Martina Hingis won tournaments in Indian Wells, Rome and the WTA Tour Championships. The pair also reached the final of The French Open. By the end of 1999, Kournikova was World No. 1 in doubles.

In 2000, Kournikova began her season by winning the Gold Coast Open doubles tournament partnering with Julie Halard. She also reached the semi-finals in singles at the Medibank International Syndey. During the 2000 season, Kournikova reached eight semi-finals in various tournaments, including WTA Tour Championships. She was at the time ranked World No.8.

In 2001 season, Anna Kournikova was forced to withdraw from twelve tournaments due to injuries. She had to undergo surgery due to left foot stress fracture. That year, Kournikova reached grand slam quarterfinals at the Australian Open, but then withdrew due to her foot injury.

At the end of 2001 season, she ranked No. 74 in singles and No. 26 in doubles. The following year she returned from her injury and increased her position in the world ranks.

In 2003, Kournikova won her first grand slam match in two years at the Australian Open. During the match, she sprained her back and had to withdraw from several games. She participated in her final match of WTA but had to retire after the first round due to a left adductor strain.

During her final years of playing, Anna Kournikova gained a lot of injuries and ended her WTA career in 2003. However, she continues to play in exhibition matches for charitable causes. She also plays in the World Team Tennis doubles.

In 2008, Anna Kournikova became the spokesperson for K-Swiss. She participated in the 2008 Nautica Malibu Triathlon, raising funds for Children's Hospital Los Angeles. Kournikova won the race for K-Swiss team.

A lot of her fame has come after the world noticed Kournikova's beauty. She has appeared in numerous magazines worldwide, including Sports Illustrated Swimsuit Issue. She made an appearance in the 2000 film Me, Myself & Irene. In 2010, Kournikova joined reality TV show The Biggest Loser where she challenged the contestants to a tennis-workout.

In 1999, Anna Kournikova met the Russian NHL ice hockey player Pavel Bure. They were reportedly engaged in 2000. At the same time, she was also linked to Bure’s teammate Sergei Fedorov. Fedorov claimed that he and Kournikova were married from 2001 until 2003, but her representatives denied any marriage.

In 2001, Kournikova began dating pop star Enrique Iglesias, after appearing in his video for the single “Escape.” In 2008, Iglesias confirmed that they had married in 2007, but subsequently separated. Kournikova herself has never commented on her personal life. In 2010, Kournikova became a U.S. citizen.