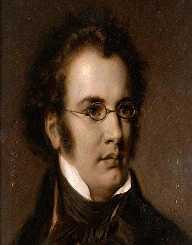 Franz Peter Schubert was a classical composer, who also started composing during the Romantic period of music.

Franz Peter Schubert was born on 31st of January 1797, in Himmelpfortgrund, Austria. His parents were Franz Theodor Schubert and Elisabeth. Franz was the fourth surviving child of the schoolmaster, and three older brothers and a younger sister. His parents had fourteen children, but only five survived to adulthood.

The family was a musical one, where Franz Peter gained his basic musical education from.  Franz played the viola in the family’s string quartet.

In 1808, Franz Peter was awarded a scholarship at the Imperial Boarding School and Royal City College. At the Stadtkonvikt, he learned the organ from organist Wenzel Ruzicka, singing and music theory. His scholarship allowed him a place in the imperial court chapel choir.

During his time in Stadtkonvikt, Franz Peter quickly became a leader in the student’s orchestra, playing the violin.

Franz Peter also conducted when his teacher Wenzel Ruzicka was absent. At the age of fifteen, Franz’s voice broke, forcing him to leave the school in 1812, but he continued to learn to compose from Antonio Salieri.

The end of his choirboy career forced him to study teaching in 1814, Franz Peter then became an assistant at his father's school. Franz continued to compose music in his spare time.

Franz Schubert composed a symphony, nine Church songs about more than a hundred Leaders in 1815. He was unsuccessful in his application as Kapellmeister at Laibach.

Upon encouragement from his friend Franz Von Schober, Franz Peter took eight months off teaching to live with a friend’s mother. During 1815 and 1816, he met baritone Johann Michael Vogl and Joseph Hüttenbrenner.

The pair promoted Franz’s music to friends and other musicians. Franz Peter also wrote two operas: A Sentry for Four Years and The Friends of Salamanca, both failed to gain ground.

In 1817, while Franz Peter started composing piano sonatas, and wrote his more famous songs. He was forced to teach in Rossau after his father moved there late that year. He had also rejected a membership from the Gesellschaft der Musikfreunde in 1818.

Despite the rejection, Franz Peter s Italian Overture in C Major, which he performed in, received praise at home and abroad. He was also recruited as a music teacher for two daughters of Count Johann Karl Esterházy.

While Franz Peter was a famous musician, his efforts to publish his work were in vain. He received little royalties on his publications until Johann Vogl performed Elf King in a concert in 1821. His success meant he had resources to publish more, making him financially stable.

While Franz Peter was popular in concert parties and dance, and Schubertiaden was named in his honor; his attempts at stage concerts failed. His twenty stage attempts failed, some remain unfinished.

While he was unsuccessful in achieving his dream, Franz Peter continued to composer other music such as sonatas and lieder.

Franz Peter continued to compose music despite his ill health. When he died in 1828, he had composed more than 1500 pieces of music and had around 100 opus numbers consisting of chamber music and sonatas.

Franz Peter works were rescued by Sir George Grove and Arthur Sullivan in 1867 and were published to the masses. Franz Schubert’s short pieces were gained more recognition than his long stage pieces.

After Franz Peter mother’s death in 1812, his mother died, Franz senior remarried a year later. His stepmother used to help with financial loans when he was impoverished.

The harsh Austrian marriage law prevented Franz from marrying Therese Grob in 1814, as the law required proof that he could support a family.

Franz Peter was admitted for treatment of syphilis in 1822, but he recovered. The condition relapsed in 1826, which required another bout of treatment.

While Franz Peter was diagnosed with typhoid fever, some believe that he was also experiencing mercury poisoning. Franz Peter passed away on 19 November 1828, at the age of thirty-one.

Franz Peter was buried next to Beethoven in the village cemetery of Währing, Vienna. His friends raised enough to fund a memorial stone in 1830. In 1888, both him and Beethoven were moved to Zentralfriedhof and were housed with other greats like Johannes Brahms and Johann Strauss II.