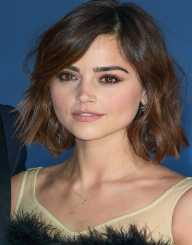 Jenna Louise Coleman was born on April 27, 1986. She is an English actress. She is professionally known as Jenna Coleman. Jenna is currently Thirty-two years old.

Jenna Louise Coleman was born on April 27, 1986, in Blackpool, Lancashire, England. She was born to Keith Coleman and Karen Coleman. Jenna was brought up alongside one sibling. She later joined and studied at Arnold School. She was a member of the In Yer Space theatre company. Jenna then performed at the Edinburgh Festival in the ‘Crystal Clear’ play. She later graduated from the school.

In 2005, Jenna Louise Coleman sparked off her career by being chosen to appear in the television series ‘Emmerdale’ as Jasmine Thomas a role she played until 2009. Four years later, she appeared in some episodes of the television film ‘Waterloo Road’ as Lindsay James. In 2010, she was privileged to feature as the character Princess Melia Antiqua in the video game ‘Xenoblade Chronicles.’ In 2011, she appeared as Connie in the film ‘Captain America: The First Avenger.’