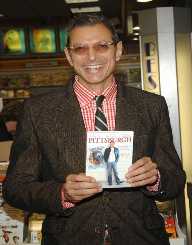 Tall, handsome, gangly, screen, television and film actor, Jeff Goldblum is more than just a fiction trait. Jeff can take a role of any genre and fit perfectly. He is best known for his supporting roles in both comedies and drama. He had played several films such as ‘Freak#1’ before he rose to fame. Goldblum was famously known for starring in movies like ‘Jurassic Park’ and ‘The Fly.' Let’s see what he has in store for us.

On October 22, 1952, Jeffrey Lynn Goldblum was born in Pittsburgh, Pennsylvania, United States. His father, Harold was a doctor and his mother, Shirley was an entrepreneur. Goldblum attended Taylor Allderdice High School in Pittsburgh. Right from his childhood days, Jeff wanted to become an actor. He kept this for himself till when he joined a drama school at Carnegie Mellon University. At the age of 17, Jeff went to New York in search of his acting career. He targeted the famous Neighborhood Playhouse where he got a chance and joined the rest of the team.

In 1974 Jeff appeared on his first album titled ‘Death Wish’ where he played the role of ‘Freak #1’.Also, he essayed small roles in films like ‘California’ in 1974 ‘Special Delivery’ in 1976, ‘Next Stop,’ ‘Greenwich Village’ in 1976, ‘Annie Hall’ in 1977 and ‘Invasion of the Body Snatchers’ in 1978. At similar intervals, Goldblum appeared in television episodes such as ‘Columbo,' ‘The Blue Knight’ and ‘Starsky & Hutch.'

In 1980 Jeff Goldblum released his first television movie titled ‘The Legend of Sleepy Hollow. The same year he starred the role of Lionel Whitney in ‘Tenspeed and Brown Shoe’ television series. Around the 1980s and 1983s, Jeff received encouraging reviews in films like ‘The Big Chill’ and ‘The Adventure of Buckaroo Banzai Across the 8th Dimension. In 1986 Jeff won Saturn Award for Being the Best Actor in ‘Fly’ film. He was later nominated for ‘National Society of Films Critics Award’ as well as New York Critics Award.

From 1980 to 1986 Goldblum joined the ‘Playhouse West’ acting school where he showcased different acting skills. Further, he directed ‘Little Surprise’ film that featured many actors from his teaching school. The film garnered Academy Award for Best Live Action Film.

Consequently, Goldblum has appeared in more than six television series including Crank Yankers, Tim and Eric Awesome, Raines among others. ‘Will & Grace’ series earned him a Primetime Emmy Award for being an Outstanding Guest Actor.

‘The First Dept’ is the name of a new theater company that Jeff established in New York. He was then encouraged to produce films like ‘Pittsburg,' ‘Perfume,' ‘Adam Resurrected’ among others. He appeared in ‘Morning Glory’ comedy film in collaboration with legendary Harrison Ford and Diane Keaton. Besides being a heroic actor, Jeff is a professional jazz pianist. He once created a jazz band named ‘The Mildred Snitzer Orchestra’ in partnership with his fellow actor Peter Weller.

Jeff got recognition by performing in excellent places such as ‘Pittsburg Civic Light Opera,' ‘The Music Man’ and the ‘Prisoner of Second Avenue.' His major performances include ‘El Grande de Coca-Cola’ and ‘The Moony Shapiro Songbook.' From 1997 to 2015 Jeff has voiced numerous video games such as ‘Jurassic Park,' ‘Lego Jurassic World’ and ‘Independence Day.'

On July 4, 1980, Jeff married Patricia Gaul, an actress but they later divorced after six years. Jeff and Patricia appeared in ‘Silverdo’ film in 1985.On 1st November 1987; Jeff married Geena Davis where they appeared in the movies like ‘Transylvania 6-5000’ in 1985.The couple separated on October 17, 1990. He later got engaged to Laura Dern, an American actress. In 2014 Goldblum engaged Emilie Livingstone and got married on November 8, 2014. The couple has a son named Charlie Ocean.