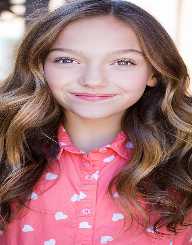 Jayden Bartels is an American citizen, and she was born on 1st November 2004. Jayden Bartels's reviews and family inclinations point to the fact that her family is also immersed in the arts. She might not be the All-American story, but her rise puts in focus the limitless opportunities open to all in the U.S.

Jayden Bartels's notable videos online include those that features her dancing with her father.

Jayden Bartels is reputed to have begun dancing as a child. And this led her to become a part of a dance crew that was involved in contemporary, hip-hop, jazz and ballet varieties. Jayden sang as a member of a group of performers for some years. Apart from this, she was also able to go on solo performances at such platforms. Jayden's soaring reputation made her feature in some TV commercials and daytime shows. Her retinue of programs that she featured in includes dance features in Dance-Off Juniors and Dance Moms.

Jayden Bartels's first appearance on Television was actually on a Web series that was titled Clique Wars. When she appeared on Dance Moms during the sixth season, it was like an encore. And it was for the episode that was titled “Float Like a Butterfly, Sting Like Ab-bee.” Jayden had also cast in “When Pigs Fly,” which was based on a USC theme in 2016. This was a short film that was based on overcoming personal imagination through the growing process.
Andrew Wood was credited with the film and was also the director.

Jayden Bartels worked with LA Models for a period in her life in addition to staring as an actress. Jayden also wore the hat as an actress and singer. For her dancing acumen, she became a part of the Millennium Dance Crew and Movement Talent Agency respectively. Among the TV appearances, Jayden Bartels is credited with include Toys-R-Us, El Monterey, and Pizza Hut commercials. Her stage performances include Little Shop of Horrors, Alice in Wonderland and Little Mermaid as well as Newsies.

Jayden was in for auditions when Purpose Tour Children from Washington DC opened up for cast selection. She made it on stage too for a Justin Bieber tour for the musical, What About The Children. This was later uploaded to her YouTube Channel in May 2016

Jayden Bartels is at home with descriptions such as model, actress, and singer. This is a testament to the skills she has put up over the years. Featuring alongside Justin Bieber also gave her additional mileage that cannot be ignored as it made her more prominent. The chance for more reviews came along with the Justin Bieber tour, and many online reviews took note of this easily.

Jayden's attraction as a celebrity is only building up to hit a worthwhile crescendo as the years go by.

Jayden Bartels takes ownership of the stage when perfuming for any audience. Loving to dance, act, and sing makes it easy for her to hone her stagecraft efficiently. She performed for the Summer Art Academy as well as Ovation Theater Group. Jayden booked a place on the cover of the video version of the Meghan Trainor, song titled ‘NO.’ Jayden featured the lead dancer on this video musical with two other boys and girls tagging along. She made another music video version for Boombox, which was a song made initially by Laura Marano.
Jayden performed Daya’s song titled ‘Sit Still, Look Pretty’ on the 5th of August 2016, and it was released on the label of DreamWorksTV.

Jayden Bartels followed it up with a 20th August 2016 release of a trailer of ‘The Swan Princess: Princess Tomorrow, Pirate Today’ on Instagram. This was to make it known to the world that she provided the voiceovers for Alise, the lead character.

Jayden Bartels is active on channels like Twitter, YouTube, and musical.ly. She is also on YouTube and Instagram. Jayden uploads her dancing class videos, auditions and other performances on her YouTube channel. This is in addition to her vlogs, music videos, and skits, which attracts wide viewership online. Jayden Bartels's fan base has grown to 900,000 and counting on the musical.ly app. She is noted to have begun using her account here when she was ten years old.

At the peak of acting roles in the stage production known as Little Mermaid as well as Mary Poppins. Newsies also come up for mention as well as the Little Shop of Horrors. Other works are also to her credit, and they are part of a growing list that extends further by the day. Jayden Bartels was on the cast for an episode of the "Lost Souls” from the ‘Criminal Minds: Beyond Borders,’ the second season. Jayden also featured in ‘It's Always Sunny in Philadelphia’ in one of the 2017 episodes. She is slated for other roles in Nicky, Ricky, Dicky & Dawn ‘in a guest appearance feature.