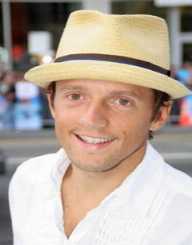 Jason Mraz was born to parents of Czech descent on June 23, 1977, in Virginia. His father was Tom Mraz and his family separated while he was still a kid. Jason got a proper upbringing in a neighborhood that was safe.

After completing his elementary education, Jason Mraz moved on to Lee Davis High School, and he was an active cheerleader. Jason moved on to New York after this and proceeded to the American Musical and Dramatic Academy.Jason studied here over the next couple of months before enrolling at Longwood University, Virginia. He was however too consumed by a passion for music that he dropped out of school.

Jason Mraz started out on his career by performing for a band known Elgin Park in 1999 in the US city of San Diego. He teamed up with Toca Rivera after that and lit up a coffee house called Java Joe for the next three years.Jason's popularity surged from here, and he ramped up the fan numbers

By the year 2002, Jason Mraz signed up with Elektra Records and his debut album was released. Jason titled this Waiting for My Rocket to Come. He made it to the Billboard 200 and peaked at number 55 on the chart. He was able to go platinum after selling more than a million copies.

Jason Mraz's influence spread further in 2003, when performed in London at the Royal Albert Hall, and opened for Tracy Chapman. Jason recorded and released a live album while on tour in the year 2004, and this was titled ‘Tonight, Not Again: Jason Mraz Live at the Eagles Ballroom.’

Jason Mraz worked on a second studio album by the year 2005, and it was titled “Mr. A-Z”. This effort was able to make it to number 5 on the Billboard Top 200 and was rated an-above-average success.

Jason Mraz was in Singapore in the year 2006, where he performed at the yearly Mosaic Music Festival. In the same year, he had an American national tour and made it too to Ireland and the rest of the UK.

Jason Mraz had a resounding success in 2008 with his new album, and he was a rave act all across America. This album was titled “We Sing, We Dance, We Steal Things” He had previously made three EPs before this time, and they were included in the collection with acoustic versions.

Jason Mraz embarked on a global tour this time and performed in Australia, Asia, and Europe. He made a real splash with this trip and documented the sights and events in a photo book that he titled “A Thousand Things” in the year 2008.

Jason Mraz released the next album in the year 2012 and called it “Love is a Four Letter Word.” His work also got a couple of excellent reviews for this new album all across America. Jason put out a single which was also well-received. The single was tilted I Won’t Give Up. He made it to number one on the Canada chart and number two in the UK.

Jason Mraz also went for live performances at the O2 Arena in London, Madison Square Garden in New York City and Hollywood Bowl in Los Angeles. His 2014 album was titled “Yes!”, and was released in July.

Jason Mraz won the Grammy’s in 2010 in two categories. The first was the “Best Pop Collaboration,” and it was for the vocals for the song, ‘Lucky.’Jason also won in the “Best Male Pop Vocal Performance” category for the song, ‘Make it Mine.’

In the year 2013, Jason Mraz picked up an award for the Best Pop Male Artist from People's Choice Award.

Jason Mraz's most reputed album is We Sing, We Dance, We Steal Things, and some of the rave songs included I’m Yours and “Make it Mine.”

Known for Mr. A-Z, all across America for his song that was so titled, Jason Mraz has shown his love for music and not just for the acclaim that comes with it. Jason's success with the songs that he released was overwhelming for him, and he decided to have a break,

Jason Mraz returned to the music scene after his time off and continued doing what he knows to do best. His string of soulful and heart-stirring songs has continued to rule the airwaves globally.

Since his Grammy successes, Jason Mraz has picked up a couple of other awards that are also prestigious. His performances continue to intrigue fans, and he has not stopped thrilling his audience across America and beyond. His line-up of songs shows his sincere appreciation of life and the themes that fans enjoy across the globe.

Jason Mraz got married to Sheridan Edley in the year 2001. Sheridan was a makeup artist, and they divorced in less than a year into their union. He got involved with a singer, Tristan Prettyman later on but the pair could not hold it for long.

Jason Mraz was later married in the year 2015 to Christina Carano in 2015.