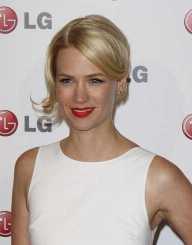 January Jones is an actress and model, best known for her role as Betty Draper in Mad Men.

January Kristen Jones was born on 5th of January 1978 in Sioux Falls; she has two sisters: Jacey and Jina.

Their parents are Marvin Roger and Karen Sue Jones, and the family lived in Hecla, South Dakota during her childhood. Later, the Jones moved back, and January attended Roosevelt High School in Sioux Falls.

During high school, January Jones worked as a lifeguard, and as a counter girl at Dairy Queen.

January Jones did not pursue higher education after high school, choosing to move to New York City to become a model.

January Jones was recruited for Abercrombie & Fitch and Clearasil modeling advertisements, despite her height. Modelling provided her a means to survive and avoid college, allowing her to move to Paris, and then branching out to Los Angeles to try acting as a career.

January Jones found that she had a talent for acting even though she had no prior training. She appeared in television commercials

In 1999, January Jones had a minor part in the television movie Sorority, but her first screen debut was in All the Rage. Before landing in these films, she acted in television pilots, but not many made into production.

After 1999’s first, January Jones appeared in The Glass House and the Bandit. January was also offered supporting roles in films such as Anger Management, Love Actually and many more.

Finally, January Jones, she was the lead female in Love’s Enduring Promise.

January Jones played Betty Draper Francis in Mad Man series; the show helped her gain fame with award nominations. She is also known for her part in American Wedding, which is part of the American Pie series.

In Xmen: First Class, January Jones played Emma Frost. She also hosted an episode of NBC’s Saturday Night Live in 2009. To date, she was credited in eighteen films, and nine television series.

Mad Men ended in 2015, while her role as Melissa Chartres in The Last Man on Earth is still ongoing.

January Jones won Screen Actors Guild Award in 2009 and 2010, for Outstanding Performance by an Ensemble in a Drama Series. January won the award with her performance in Mad Men.

January Jones is the spokesperson for Oceana in 2009. Oceana is a nonprofit organization that campaigns for protection and restoration of the ocean and its inhabitants. January is speaking for the work save endangered sharks.

January Jones first high profile date was Ashton Kutcher, the pair dated from 1998 to 2001, they broke up after Ashton was not supportive of her acting.

While her acting star was rising, January Jones was in a relationship with Jason Sudeikis; it only lasted six months.

After announcing her pregnancy, and taking time off Mad Men, January Jones gave birth to Xander Dane Jones on 13 September 2011. She declined to name the father to the media and public.