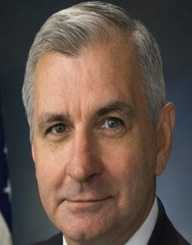 Jack Reed is a former US military officer turned politician. Currently aged 69 years, he is the Democrat Senator for the state of Rhode Island.

Jack Reed was born on November 12, 1949, in Cranston, Rhode Island. His parents Joseph Anthony Reed and Mary Louise named him John Francis Reed. He later picked up the nickname Jack. Joseph Reed was a former WW1 soldier and a career educationist. Jack’s mother was a domestic housewife. From his early life, Reed learned vital lessons from his parents. The values of a pure family, hard work and a strong education background shaped his life from his childhood.

He also practiced law after his graduation from Harvard in 1982. He was initially at Washington D.C. but later relocated back to his home state. In Rhode Island, he practiced law at Edwards and Angell until his entry into politics.

The long political life of Jack Reed started in 1984 when he was first elected into Rhode Island’s state senate. He went to be reelected for three terms from 1984 to 1990.

In 1990, he left the state Senate for the US Congress. He served as a congressman until his move to the US Senate in 1996.

Jack Reed won the 1996 Senate elections and is still the incumbent to date. In nearly all his campaigns, Reed has always focused on security, education and social welfare. Due to his previous impressive track record, his reelections have mostly been overwhelming with landslides.

In his political life, Reed has been nominated to various congressional committees. He has been a member of 12 subcommittees including housing, appropriations, military construction, defense, and finance among others. Considered a dove with a working mentality by his party, Reed got several nominations to the cabinet by former President Obama. Despite the lucrative nature of the nominations, he declined. His political followers have since been pondering his move after Senate.

Considered a liberal, Jack Reed is a firm believer in the principles of his party. He has always voted along party lines in almost all the bills in the state Senate and the national congress. He is a strong proponent of the affordable healthcare program, abortion rights, and enrolment of gays into the army. This came as a surprise following his Catholic background.

Jack Reed is married to Julia Hart. The two got married in a Catholic ceremony in 2005 and had a child. Their daughter Emily was born in January 2007.

Outside politics, he is a member of other organizations like Democratic friends of Portugal. He is still a member of the District of Columbia Bar Association. He is actively involved in the upgrading of the underserved in the education system

Despite coming from a humble background, Jack Reed has managed to be a pillar in his society. The childhood attributes that he learned from his father have come to shape his service to the community. His zeal for hard work in office has always made his reelection bids. Even when he was considered an outsider as in 1990 elections, Reed managed to use his experience to tilt the votes to his favor.

Unlike other national politicians, Reed has kept a low profile continuously in presidential elections. He renounced news that he was to be Obama’s vice presidential candidate in 2008. Despite the assurance of the Obama wave in the American electorate, Reed still declined, he again rejected an offer to be the Secretary of Defense. This has cemented his figure as the laid-back Democratic politician whose primary purpose is to serve the people of Rhode Island while strengthening his party.