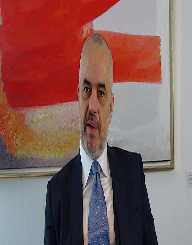 Edi Rama is an Albanian politician, artist, and writer. Born on July 4, 1964, he is currently the Prime Minister of Albania and has been serving in that capacity since 2013. He has also served as the leader of the Socialist Party of Albania since 2005. Before rising to the prime ministerial position, Rama served as the Minister of Culture, Youth, and Sports from 1998 to 2000. From 2000 to 2011, he was the Mayor of Tirana, serving three consecutive terms. He led the socialist and lift wing parties to win over the conservatives in the June 2013 parliamentary election.

Edi Rama was born on July 4, 1964, in Tirana to Kristaq Rama and Aneta Rama. Kristaq was a prominent sculptor and authored monuments like MonumentiIPavareise, ShoteGalica in Kukes and that of Mother Albania in the National MartyrsCemetery of Albania. Aneta, on the other hand, was a graduate of medicine from Vuno, Vlore. Edi Rama took interest in painting at his childhood days, and this talent was discovered by two famous Albanian painters, Edi Hila and Danish Juniku who urged him to make it his professional career. With this encouragement, he decided to pursue painting and in 1982, enrolled in the Faculty of Fine Arts. Aside from painting, he was also interested in sports and became a professional basketball player for Dinamo Tirana.

Rama was also a member of the Albanian National Basketball Team. After the fall of the Communist in Albania, Rama got involved in politics by joining the democratic movements. He also joined the student movement, but due to ideological differences, he left the group. With his interest in arts and the quest to develop his skills, he left Albania for France in 1994. While there, the quick started his painting career and took part in several exhibitions alongside his friend Anri Sala. After three years in France, he returned to Albania in 1997.

Edi Rama developed his interest as an artist and subsequently as a writer. He partook in several exhibitions and also organized personal exhibitions including Janos Gallery, New York City (1993); Place de Médiathèque, France (1995); and Palais Jalta, Frankfurt (1997) among several others. He published a self-titled book Edi Rama in 2009 and Kurban in 2011.

Edi Rama's entering into mainstream politics was unplanned as it just happened. Even though he was involved in some political activities in the past, his interest in the painting seems to have overshadowed it. All this happened when he decided to return home from France in 1997.  Upon his arrival in Albania, he was assaulted by a group of persons believed to part of the Secret Services SHISH, which was intended to serve a deterrent for being outspoken against the Berisha government. This assault was highly discussed. His political appointment came in 1998 after he received a call from the then Albanian Prime Minister, Fatos Nano, who asked him to serve in his government as the Minister of Culture and Youth, which he accepted. Rama assumed office with several initiatives, but his style of dressing took the center stage. Additionally, his persona, rebellion political posture, and his controversial nature gained him huge supporters, and that became a plus in his political career.

Serving as the Minister of Culture and Youth and the popularity it came with made it easier for him to contest and win the 2000 elections a mayor for Tirana Municipality. Rama contested as an Independent candidate but gained the support of the Socialist Party in a fiercely contested election against writer Besnik Mustafaj. Rama took a strong stance as a mayor and what can be said as a political suicidal mission by demolishing hundreds of illegal constructions. This was aimed at returning River Lana and major parts of Tirana center to its natural form. He also gave most of the Soviet style depleted buildings in Tirana a facelift and repainted them, which gained him international recognition. The approach enhanced the look of Tirana and gained it a tourism status that won him the World Best Mayor in 2004.

Rama made the city environmental friendly by planting thousands of trees and improved on infrastructure including expansion of the road network. Rama policies and initiatives won him another two consecutive terms in the 2003 and 2007 Albania Municipality Elections. However, he could not make it for the fourth time after he was defeated by Democratic Party candidate Lulzim Basha in the 2011 municipal elections. The election was characterized with several controversies and was counted for six days. Even though Rama had a slight win after the long day's count, the court ruled in the favor of Lulzim Basha making him the new mayor.

Edi Rama took the leadership position of the Socialist Party in October 2005 after Fatos Nano resigned. Rama brought some form of revival in the Socialist party and his fame as a mayor attracted several people into the party. He also took the initiative of engaging artists, young intellectuals and entrepreneurs join. He held the position until 2013 when he became the prime minister.

As a popular figure and the leader of the Socialist Party, Edi Rama led a coalition of left parties to contest the Albania 2013 Parliamentary Elections. The coalition won a landslide victory over the conservative coalition led by PM Sali Berisha. He campaigned on four thematic policies being European Integration, restoration of the public order, economic revitalization and democratization of the state institutions. He has been the Prime Minister from that time till now.

Edi Rama has initiated several interventions to reduce the crime rate, modernise the country and invest in the training of the people. He has reformed the energy sector and invested in it to meet the needs of the modern time. Rama’s administration has ensured growth in the economy from 0.5% in 2013 to 3.5% since 2016 with an expectancy growth of 4% in 2017. He has been able to create over 183 000 new jobs, which has steadily reduced the unemployment rate of the country.

Edi Rama has been married twice, first to actress Matilda Makoci. The two were blessed with a child Gregor and divorced in 1991. His second marriage was to Lindita Rama, an economist and civil society activist in 2010. The two have a son Zaho, born in 2014.

Edi Rama has gained several honors and awards, including, an award from former UN Secretary General, Kofi Annan, during the International Day for the Eradication of Poverty in 2002. He was named World Mayor 2004 in December 2004. In 2005, he was chosen as one of the European Heroes by Time magazine and was given the title of Honorary citizen of Ulcinj in 2015 during the Ulcinj Day. Rama was awarded the highest French Honour, the order of the “Commander of the Legion of Honour” in 2017.