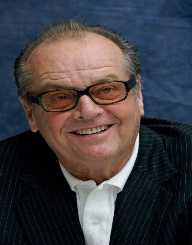 Jack Nicholson has spent decades in the entertainment business. Some of his most memorable characters are dark or psychotic, but he shows versatility in many award-winning roles.

Jack Nicholson was born on April 22, 1937, in Neptune City, New York. His maternal grandparents raised him under the belief that they were his birth parents. It wasn't until he was famous that he learned that his older sister was his mother. She did not know who his father was.

Jack Nicholson went to Manasquan High School when he and his family were living in Spring Lake. As a student, he was very distracting in the classroom. He was voted Class Clown by his peers. He graduated from high school in 1954. He never aspired to go to college, so he went to make his way to Hollywood after high school.

Jack Nicholson and his “sister” June moved to Los Angeles as they both aspired to be actors. They found part-time work while searching for their big break. When a producer from MGM studios noticed Nicholson, he was placed in acting classes and a place in The Player's Ring theater.

Jack Nicholson was able to take on leading roles in B-movies but tried his hand at screenplay writing. One of his screenplays, The Trip, became a movie starring Peter Fonda and Dennis Hopper. These were the same actors who were in his first significant movie Easy Rider in 1969. He was nominated for Best Supporting Actor by the Academy of Motion Pictures that year.

However, it is a most iconic performance in 1976 that has made him famous. That was the year he was the over-the-top mental hospital patient in One Flew Over the Cuckoo's Nest. He received much praise and many awards including the Oscar for Best Actor.

When the 1980s came around, Jack Nicholson continued delivering strong performances. It started with the 1980 film The Shining directed by Stanley Kubrick. While he had a role in The Postman Always Rings Twice and The Witches of Eastwick, he earned Oscar nominations for Reds and Ironweed plus a win for Terms of Endearment. He portrayed a memorable Joker in the 1989 movie Batman.

The 1990s demonstrated that Jack Nicholson was not ready to stop acting. He was in movies such as Hoffa, Mars Attacks!, and Man Trouble.  While some were not as well received, he still gave award-winning performances in A Few Good Men and As Good as It Gets.

At the turn of the millennium, Jack Nicholson showed his acting diversity in comedy such as Anger Management and drama such as The Departed.  He also had roles in The Bucket List with Morgan Freeman and Something's Gotta Give with Diane Keaton.

Jack Nicholson has appeared in fewer movies in the past decade, but there is talk that he will appear on the screen by the end of the decade.

Jack Nicholson married Sandra Knight in 1962. They had a daughter, but their marriage ended in 1968. Jack Nicholson has been followed by the tabloids for his numerous relationships, some of which resulted in children. He was in a long-term relationship with Anjelica Huston and Rebecca Broussard and has also been connected with Lara Flynn Boyle.

Jack Nicholson has been nominated and awarded many honors throughout his career. From Golden Globes to BAFTA Awards to Screen Actors Guild Awards, he has been recognized for his work.

Between 1960 and 2010, Jack Nicholson has received an Oscar nomination in each decade for his work in film. The only other actor to achieve that is Michael Caine.

Jack Nicholson has also earned the most nominations for a male actor in the history of the Academy Awards. With three wins, he is also in an elite group of those with the most awards. Those nominations and awards include:

1976 One Flew Over the Cuckoo's Nest, Best Actor (winner)

Jack Nicholson is a sports fan, especially in professional basketball. He holds courtside season tickets for the Los Angeles Lakers.