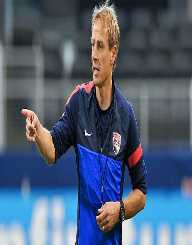 Jurgen Klinsmann is famed for being a renowned German football manager. In addition to this, he was formerly a German football player. He has recently worked as the manager of the national soccer team of United States. He earned his fame for playing with notable clubs in Europe. During the 1990s, Klinsmann was a team player for the West German Team that took home the FIFA World Cup. He also won the UEFA European Championship in 1996.

Jurgen Klinsmann was born on July 30th, in 1964. His birthplace was in Goppingen in West Germany. His father was called Siegfried Klinsmann. On the other hand, his mother was named Martha Klinsmann. Siegfried was a proficient baker and later own, he managed his bakery store. Jurgen has three other siblings he calls his brothers.

Jurgen interest in football began when he was still young. By the time he was aged eight years, he had already enrolled with a local club called TB Gingen. His goal scoring abilities were evident at this time. Two years later, he switched clubs and joined SC Geislingen. At the age of 14 years, his father decided for opening up his own bakery business. Therefore, the entire family had to move to Stuttgart, Germany. Moving to Stuttgart also favored young Jurgen as he joined Stuttgarter Kickers two years later.

With his exceptional football talent, Stuttgarter Kickers saw that he was their target man in all the games that he featured in. During the 1983 to 1984 season, Jurgen managed to score 19 goals. The season beginning in 1984, he was moved to VfB Stuttgart first division team and scored 15 goals in his debut season as a first divisioner. In the coming two seasons that ended in 1986 and 1987, he scored 16 goals.

His experience on the ball earned him a spot on the German national team in 1987. He went on to play internationally in the Olympics games and European Championships that they were involved in.

In his first season with Monaco, his contribution ensured that the team was ranked second place at the end of the season. His team also managed to play in the Champions League after the disqualification of Olympique Marseille. Jurgen also helped his team reach the semi-final before being knocked out by Milan who emerged the winners of the highly coveted European trophy. Jurgen departed from Monaco in 1994. At this time, his contract had not ended as he had another year to play but he opted to leave following disagreements with his teammates.

Immediately after leaving Monaco, Jurgen joined the English side, Tottenham Hotspur in the season beginning 1994. He received several criticisms from the English fans as he was among those that played in the German team which knocked England out during the 1990 World Cup. Thanks to his high scoring abilities, he won back the hearts of many following his debut goal in England while playing against Sheffield Wednesday. He was crowned the Footballer of the Year in 1995.

Apart from playing for Monaco, VfB Stuttgart and Tottenham Hotspur, Jurgen also went to several other different clubs including Bayern Munich and Sampdoria.

After retiring from being a soccer player, Jurgen earned himself a job as the Germany national team manager. His team was somewhat successful as they managed to reach the semi-finals before being knocked out. This was in 2006 World Cup and that they were beaten to the finals by Italy. Later on, in 2008, he was appointed the coach to the Bundesliga giants, Bayern Munich. Sadly, his team portrayed a series of poor performances, and this left the club no choice but to fire him before the season ended. In 2011, he was appointed the manager of the national team of the United States.

In 1995, Jurgen got married to Debbie Chin. Chin was an American model. The pair is blessed with two children namely Laila, the firstborn, and Jonathan.