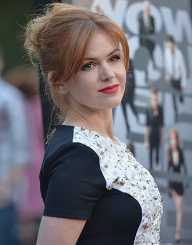 Isla Fisher is an actress and author.

Isla Lang Fisher was born in Muscat, Oman on February 3, 1976. After spending some time in Bathgate, Scotland, her family then moved to Perth, Australia when she was six. Her parents are Elspeth Reid, romance author, and Brian Fisher, who worked as a banker for the U.N. Isla has two brothers and two stepbrothers. Her parents divorced when she was nine.

Isla Fisher attended Swanbourne Primary School and Methodist Ladies' College. After playing the role of Shannon Reed in an Australian soap Home and Away, she moved to Paris in 1997. Isla attended L'École Internationale de Théâtre Jacques Lecoq, where she studied clown, mime and commedia dell'arte, she did not speak French before attending school.

Isla Fisher was born Jewish but converted to Judaism to marry her husband, Sacha Baron Cohen.

Isla Fisher’s first job was as a lottery ad extra at 12 years of age, although she had started appearing in commercials since she was nine. She also appeared in children's television shows Bay City and Paradise Beach, before moving onto Home and Away in 1994. She played Shannon Reed in the Australian Soap for three years before leaving Australia for Paris.

She released two books for young readers when she was eighteen, Bewitched and Seduced by Fame. After graduating from L'École Internationale, she went to the United Kingdom for a stint in pantomime, titled Cosi. In 1997, Isla’s first appearance on film was Bum Magnet, a teenage comedy where she played Emma, the girl who fell for Bums and gets burnt.

In 2016, Isla released another book titled Marge in Charge, a junior fiction. She once confessed that if she was not a successful actress, she would be an author.

It was Scooby- Doo in 2002 that catapulted Isla Fisher into fame, playing Shaggy’s love interest, Mary Jane. Then she was cast in a few more comedy roles such as I Heart Huckabees, Wedding Crashers and many more. She ventured into another genre by playing Myrtle Wilson in The Great Gatsby. And, she landed another role in crime thriller Now You See Me.

Isla Fisher had voiceover roles in Horton Hears a Who, Rango, and Rise of the Guardians. In total, she has twenty- six titles on her belt, not including animated voiceovers.

Isla Fisher briefly dated Darren Day in 1998 and toured with him in the musical Summer Holiday. They're on again, off again relationship ended officially in 2000. She then met Sacha Baron Cohen in 2002 in Sydney. The couple became engaged in 2004.

To marry Sacha, she converted to Judaism, completing her conversion in 2007. Isla took the Hebrew name, Ayala. They married in Paris in a Jewish ceremony, on 15 March 2010. Together, they have two daughters: Olive and Elula and son Montgomery.