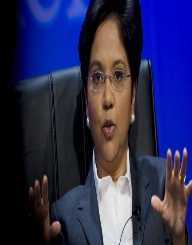 Also Known For : CEO Of Pepsico

Indra Nooyi (born Indra Krishnamurthy) is the 5th CEO of PepsiCo. She played a major role in turning Pepsi from a mere soda based company to a more health-oriented food and beverage business. Expansion of Portfolio under Nooyi has made PepsiCo’s annual revenue more than twice.

Looked as an icon for businesswomen, Nooyi has featured in the Forbes World’s 100 most powerful women regularly. She is known for her clear vision, direction, energy, innovation and a no-nonsense approach.

Indra Nooyi was born on 28 October 1955 in Chennai(Madras), India. Her father was a banker. In a conservative middle-class setup, where her mother wanted to get her married by age 18, Nooyi broke the rules.

She joined an all-female band as a guitarist, and also played cricket in an ‘all girls’ team. It was clear that Nooyi would chase her dreams, and not give in to the pressures of a conservative, middle-class society.

Indra Nooyi was an okay, but very hard-working student from childhood. She went to the Holy Angels Anglo Indian Higher Secondary School.

Her bachelor's education was also in Chennai, from the Madras Christian College. She received degrees in Physics, Chemistry, and Math. In 1976, she left Chennai for an M.B.A program offered by IIM, Calcutta(now, Kolkata).

In 1978, after working for Johnson and Johnson, Nooyi applied to the Yale School of Management. She was accepted and moved to the US for a Master’s degree in Public and Private Management. She graduated in 1980.

A hardworking individual, with a strong business mind, Indra Nooyi has had remarkable success in her career as a business executive.

She has been one of the most sought-after business woman in the history of America.

In her early career, Indra Nooyi worked for several different companies and held many different positions. Her career began in India, with Tootal, a British Textile Company.

She then joined Johnson and Johnson as a product manager for women’s hygiene. While working here, she felt the need for improvement and decided to apply for the prestigious Yale School of Management.

While at Yale, she worked as a receptionist, for some extra money to purchase western clothing for interviews. Before she got comfortable with western outfits, she would often wear a saree to interviews.

After Yale, Indra Nooyi joined the Boston Consulting Group in 1980 holding a strategy position. In 1986, she moved on to Motorola, and then as the Senior Vice President of Asea Brown Boveri.

Her successful work at different positions over these years drew attention from major business at the time. She received offers from both General Electric and PepsiCo. Nooyi decided to move to PepsiCo in 1994.

Starting as the Senior Vice President of Corporate strategy and development, Indra Nooyi quickly rose through the ranks. She was made the CFO in 2001 and the CEO in 2006. She has held this position for more than 10 years.

Before Indra Nooyi, PepsiCo was mainly a soda based brand, with its popular product Pepsi. Her policy of redirection and expansion of PepsiCo’s product catalog has been very successful and profitable to the company.

As CEO Of PepsiCo.

Indra Nooyi considered carbonated drinks only as a ‘thing of the past’ and redirected the company towards healthier snack options.

She led the acquisition of Tropicana, a juice brand, and the merger with the Quaker Oats Company.

Under Indra Nooyi, PepsiCo has built a great work culture. She believes in the Equal Opportunity Policy, where if you can do the work you get the job, regardless of your gender. This approach has been quite successful.

Compensation And Net Worth

Indra Nooyi’s strategies have been highly profitable for PepsiCo. As of 2014, she earned a salary of $18.6 million and had a net worth of $144 million.

Indra Nooyi is famous for her innovative approach and far-sightedness when it comes to Corporate Strategy.

She displayed her ingenuity when she successfully marketed Stayfree sanitary napkins to Indian women. In the 70s, the Indian society was not so open to the marketing of sanitation products for women. Ads related to female hygiene were not widely accepted.

Her approach to direct marketing of the product to female college students, helped Stayfree capture the market. Soon it became the popular and in-demand product, it is now in India.

Indra Nooyi is also responsible for the tremendous growth in revenue of PepsiCo, nearly two and a half times when she worked as their CFO.

Indra Nooyi greatly emphasized mergers and acquisitions to move the company in the desired direction. Under her, PepsiCo acquired Tropicana, and had a merger with the Quaker Oats Company. Both these deals brought the company huge profits.

Coming from a poor middle-class background, Indra Nooyi has achieved outstanding success. Her career growth is exceptional, and she is a role model for women of this age.

She believes that success comes from becoming great at what you do. And then continuously improving your skill set. Finally, she emphasizes the strength of character, and the ability to back yourself.

Indra Nooyi serves as Honorary co-chair of World Justice Project. It is an independent body, aimed at improving the Rule of Law around the world.

She has a love for Art and is a member of the Foundation board of the Lincoln Center for Performing Arts.

Indra Nooyi is also associated with the World Economic Forum, and the International Rescue Committee.

Throughout her successful career, Indra Nooyi has received many awards and featured regularly in many best 100 lists. She was awarded the Padma Bhushan by the Government of India in 2007. It is the third highest civilian award in India.The Time Magazine listed her as one of the ‘Top 100 Most Influential People’ in 2007.

Indra Nooyi also featured consecutively for 6 years in Forbes World’s 100 Most Powerful Women from 2008 – 2014. In 2009, she was awarded the Barnard Medal of Honor, by the Barnard College. She also holds Honorary Doctorates and Degrees from universities like the Pennsylvania State University, Miami University, Duke University and more. For her outstanding work, the Global Supply Chain Leaders Group named her CEO of the year in 2009. For five consecutive years (2006-2010), Fortune magazine put her on #1 spot for the World’s Most Powerful Business Women.

Indra Nooyi is a naturalized American citizen. She has been living there since 1978. Her star sign is Scorpio and she observes Hinduism as her religion.

She is married to Raj Nooyi, President at AmSoft Systems. They live in Greenwich, Connecticut. The couple have two daughters together – Preetha and Tara.

While she ranks 3rd in Forbes World’s Powerful Mom’s list, Indra Nooyi acknowledges that work has kept her from being available to her kids all the time. She feels however, that her kids are proud of her achievements.