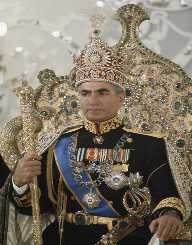 Mohammad Reza Pahlavi was born on October 26, 1919. He was an Iranian. He was renowned for being the last Shah of Iran. He was also known as Mohammad Reza Shah. He died at the age of Sixty years.

Mohammad Reza Pahlavi was born on October 26, 1919, in Tehran. He was born to Reza Khan and Tadj ol-Molouk. He was brought up alongside two siblings. In 1926, he became the Crown Prince due to the Coronation of his Father. He later received his education from the officers chosen by his father.

In 1931, he joined the Institut Le Rosey for his studies where he also learnt French. In 1935, he praised the school in French in a student’s newspaper. In 1936, he went back to Iran to attain his High School diploma. He later joined a Local Military Academy which was situated in Tehran.

In 1938, Mohammad Reza Pahlavi graduated as a Second Lieutenant. He later got a promotion to be a Captain. He was then appointed the Army Inspector, and his duties included assessing both civil and military installations in the college. He later became his father’s closest advisor. In 1941, he took the oath of office to replace his father as the new Shah.

In 1942, after his meeting with Wendell Willkie, he learnt how to fly an airplane. In 1949, he was shot in the cheek after his assassination attempt by Fakhr-Arai of the Tudeh Party. In 1953, he conducted a successful Coup D’état to appoint General Fazlollah Zahedi as a Prime minister form the American Embassy. In 1955, he dismissed him from his duties and appointed Hossein Ala’.

In 1958, there was a coup d’état attempt to remove Mohammad Reza Pahlavi form being a shah, but it failed. In 1963, he launched the White Revolution which acted as an opposition body. In 1965, he was almost assassinated, but the culprit was caught before reaching him. In 1967, his coronation was held to hand him the ancient title ‘Shahanshah (King of Kings)’.

In the 1970’s, he was considered one of the world’s most successful leaders. He later quit appearing in public due to his cancer diagnosis. In 1978, his journey to be thrown out of the high seat started. He was finally evicted from the position. He later went to exile.

In 1939, Mohammad Reza Pahlavi married Fawzia of Egypt with who he had one child. In 1948, they divorced. In 1951, he married Soraya Esfandiary-Bakhtiari with whom he divorced in 1958. In 1958, he married Farah Diba with whom he had four children. In 1974, he was diagnosed with cancer. He died on July 27, 1980, of complications of Waldenstrom’s macroglobulinemia in Cairo, Egypt. He died at the age Sixty years.