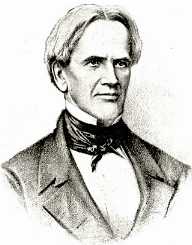 Horace Mann was an American politician and educational reformer born in 1796. Horace Mann was also a reformer. He devoted his efforts to public education. He is remembered for opposing slavery in the US. This was between 1848 and 1843. He also ensured schools had a well elaborate curriculum. On the other hand, he ensured these schools had all the necessary equipment for learning. The teachers had to earn a good salary as well. He received the title Father of the Common School Movement. This is because of the Education he gave without discrimination.

He always argued that discipline will be restored to unruly American children through a universal and reliable education. It was then that Mann education version especially normal school inspired many states. Women were trained to become teachers in these programs. When Massachusetts State Board of Education was launched, Horace Mann took a role as a secretary. He authored books such as Lectures on Education-1845, A Few Thoughts for a Young Man-1850 and Slavery: Letters and Speeches-1851

Horace Mann was born on May 4th, 1796. His place of birth was in Franklin in Massachusetts. He was the son of Thomas Mann and Rebecca Stanley Mann. His father practiced farming. His siblings were Stephen Mann and Louise Mann. Mann was from a very humble background. He faced many hardships growing up. This interfered with his schooling. He had to miss many classes through most of his schooling. This forced him to be independent at such a young age. Franklin town library was a great help to him. He would do his studies at the library when he did not attend his classes. The famous Samuel Barrett, the Unitarian minister, made a great impact in his life. He taught him Greek and Latin back in time before he became famous.

Horace Mann joined Brown University at the age of 20. He got his bachelor’s degree as a valedictorian in 1819. Later he took law at Wrentham, Massachusetts just for a while. Later in 1821 to 1823 he again studied law at Litchfield Law School. He took a job as a librarian at Brown University while undertaking his law studies.

In 1827 Horace Mann acquired a position in Massachusetts House of Representatives. He took this role till 1833. Later in 1833, he became head of trustees at the lunatic asylum at Worcester. Lunatic asylum was his establishment. Meanwhile, he was among the committee members of state statutes as the chairman. He relocated to Boston in 1833. A few years later in 1836, he was the president of the Massachusetts State Senate. Among his infrastructure reforms at the time were railroads and canals constructions.

His efforts advocating for quality education led to the Massachusetts State Board of Education. This was in 1837. This became the first education board ever to be formed. Mann served as the secretary of the board. While in the role he decided to set aside other professions as well as politics. He then dedicated all his efforts and time to act as education spokesman. He brought about many reforms and organized for many teachers conventions while at it. He introduced reforms such as normal school at Lexington and Barre among other places.

Horace Mann established The Common School Journal in 1838. This was a biweekly journal where he was the editor. The main focus of the journal was on public schools’ issues. In 1843 he traveled to Germany. He observed the education system there then returned to the US to lobby for Prussian model adoption. A trial on the model was done in 12 schools in New York City. In 1848 he took over the position of John Quincy Adams in the United States Congress. In 1852 he tried for governor with Free Soil Party in Massachusetts. Unfortunately, he did not get the position. He then decided to accept an offer from Antioch College to be the president. It was a new college in Ohio. He taught theology, economics, and philosophy.

Horace Mann wedded Charlotte Messer in 1830. She was the daughter of Asa Messer, the president of Brown University. Messer in died on August 1st, 1832. Later in 1843, Horace Mann remarried. He took Mary Tyler Peabody as his wife. Together they were blessed with three sons.

Horace Mann took his last breath on August 2nd, 1859. He died at Yellow Springs, Ohio in the U.S. He was 63. He was buried next to his late wife, Charlotte Messer.