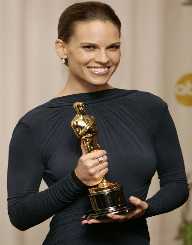 Hilary Ann Swank was born on 30th July 1974, to Stephen and Judy Swank. She was born in Lincoln, Nebraska, United States. Swank is one of two children, with an older brother named Daniel. Her father served in the Oregon Air National Guard, and after leaving there became a travelling salesman. Her mother was a secretary and a dancer.

When Hilary Swank was six years old, the family moved to a caravan trailer park in Bellingham, Washington. She went to Happy Valley Elementary School, followed by Fairhaven Middle School. Her high school education was done at Sehome High School, where she studied until she was 16. Hilary Swank was very athletic, and during her school years she competed in swimming and gymnastics. She competed in the Junior Olympics, and the Washington State Championships.

Hilary Swank’s parents separated when she was 15. Her mother supported her in her acting endeavors, and moved with Swank to Los Angeles so she could pursue her acting career. When they arrived, they lived out of their car until Hilary Swanks mother could save enough money for them to rent an apartment. Hilary Swank enrolled in South Pasadena High School to continue her studies, but a short time later dropped out. She had no interest in school, and compounded with her ADHD, she was very unhappy there.

In 1992, Hilary Swank made her film debut in Buffy the Vampire Slayer. It was only a small role, but it was the start she needed. Her first major role was in The Next Karate Kid (1994). This was the fourth in the Karate Kidseries.

Hilary Swank acted in several other movies and made appearances in television shows as well. In 1997, she won a role in the famous Beverly Hills, 90210. The role was supposed to be for two years, but she was cut after 16 episodes which was very upsetting at the time. It turned out to be a blessing in disguise for Hilary Swank, as she auditioned and was awarded the part of Brandon Teena in the movie Boys Don’t Cry (1999). It was a gritty role for which Swank received critical acclaim. She did two more movies but was then cast in the movie Million Dollar Baby (2004) as a female boxer.

Hilary Swank won Academy Awards for both these movies.

She has continued to star in movies and on television. Hilary Swank has been in 32 movies, including, Insomnia (2002), Amelia (2009, and New Year’s Eve (2011). She has also appeared in 13 television shows and television movies, including Growing Pains, and Iron Jawed Angels.

Back in 2006, Hilary Swank also became Guerlain’s face for the fragrance of Insolence. She signed a three-year contract with the company.

Hilary Swank hasn’t been without her controversy. In 2011, she attended a birthday event for Ramzan Kadyrov, the President of Chechnya. Kadyrov had been accused of human rights violations. There were human rights groups who stated they had forewarned her, but Swank said she was unaware of the situation and was sorry she had attended the event.

The appearance money she received from the event was donated to charity.

Hilary Swank has been nominated for a staggering 62 awards, and she has won 36 of them. Most of the awards were for her appearances in Boys Don’t Cry, and Million Dollar Baby.

On the set of one of her earlier movies, Hilary Swank met Chad Lowe, a fellow actor. They married in September 1997 but divorced in 2006.