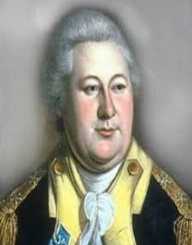 Henry Knox was an American military officer who served in the Continental Army and later in the US Army. Born on June 25, 1750, he became United States Secretary of War serving from 789 to 1794. Before entering into the military, Knox ran a bookstore.

Throughout this period, he had an interest in the military, which influenced his decision to join a local artillery company. During the American Revolutionary War in 1775, his friendship with General George Washington propelled him to become the Continental Army’s chief artillery officer. When Washington became US president, he appointed Knox as the Secretary of War.

Henry Knox was born on June 25, 1750, in Boston, Massachusetts, United States. He was born to Mary and William Knox both of Scotch-Irish descendant. His father, who was a shipbuilder, abandoned the family because of financial challenges. He moved to Sint Eustatius where he died in 1762.

Knox studied Greek, Latin, European history and arithmetic at the Boston Latin School. At age 12, he dropped out of school to become a clerk in a bookstore. During this period, he self-thought French, philosophy, and advanced mathematics. Later, he worked at a local artillery company, The Train, when he was 18. He was a witness to the Boston Massacre on March 5, 1770.

Having gained some knowledge in book sales from his previous job, Henry Knox opened a bookshop in 1771. His store became one of the favorites for the aristocrats in Boston thanks to its quality English products. He was getting products from British suppliers including Thomas Longman. His inquisition on military issues also made him build relations with soldiers.

The shop enjoyed some commercial success; however, sales began to decline due to the Boston Port Bill. Also, apathy towards British goods surged astronomically. He later joined colonial militias including co-founding Boston Grenadier Corps, in 1772. It became an offshoot of The Train.

Following the American Revolutionary War in 1775, Henry Knox enlisted in the Continental Army at Cambridge, Massachusetts. He commissioned as a colonel. Afterward, he became in charge of the artillery.

When General George Washington took over the army in July 1775, he became impressed with the capabilities of Knox, and the two later became acquaintances. That year, General Washington sent him to Fort Ticonderoga, New York, to retrieve captured British cannons.

His expedition later known as the noble train of artillery took six weeks to complete. He was able to retrieve artilleries amounting 120,000 pounds (55,000 kg). He employed the services of horses, oxen, and human power to cart the weaponry over ice and snow covering 300 miles to Boston. With the aid of the weapons, the British were driven from the city.

Henry Knox had earned the rank of brigadier general by the time of the Philadelphia campaign. During the campaign in 1778, he discharged his duties diligently while commanding the artillery at Monmouth, and New Jersey.

Henry Knox was also involved in the siege of Yorktown in 1781. Knox later attained the rank of major general on March 22, 1782. This made him the youngest army general. Following the war, he became the commander of the army, replacing General Washington.

He became the Secretary of War, on March 8, 1785, replacing Benjamin Lincoln. He retired from the position in 1794 officially leaving the government On January 2, 1795.

After retiring, Henry Knox settled in Thomaston. He built himself an estate comprising a three-story mansion and outbuildings known as Montpelier. He went into real estate speculation, cattle, farming, brick making, and shipbuilding. In 1805, he was elected a Fellow of the American Academy of Arts and Sciences.

On June 16, 1774, Henry Knox married Lucy Flucker, daughter of a Boston Loyalists. Her father was against the marriage due to his political difference with Knox. A year after their marriage, the couple bolted from Boston. Since Knox was in the military, they shared most times apart; therefore, Lucy became virtually homeless.

Her situation improved after March 1776, when the British left Boston. Since Lucy’s parents were British loyalists, they also left Boston for good. Knox and Lucy had 13 children with only one surviving infancy. Henry Knox died on October 25, 1806, at the age of 56. the death occurred three days after he was swallowing a chicken bone. The bone locked in his throat causing fatal infections. He was buried in full military honors at his estate in Thomaston.

Some towns in Indiana, Illinois, Maine, and Mary among others are named Knox and Knoxville to honor him. A fort in Main and Kentucky are named in his honor.