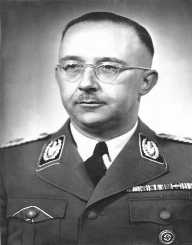 Heinrich Himmler was born on October 7th, in 1900. He was a famous SS military commander. He was also among the Nazi Party leaders. Himmler was regarded as one of the most influential men in Nazi Germany. With the power that he had amassed, Himmler was responsible for what was known as the Holocaust.

Heinrich Luitpold Himmler alias Heinrich Himmler was born on October 7th, in 1900. His place of birth was in Munich, Germany. He was the son of Joseph Gebhard and Anna Maria Himmler. He had two other brothers.

Heinrich Himmler became a member of the Nazi Party in late 1923. Later, in 1925, he joined a paramilitary organization called the Schutzstaffel –SS. From the start, he was bestowed with the opportunity of serving as a district leader. He later rose to become the party’s deputy after convincing Hitler that he was the right man to bring transformation into SS.

By 1933, the SS organization had pulled together about 52,000 individuals. This was greatly influenced by the fact that the Nazi Party had risen to power. Following the quick rise to power of the Nazi Party, this also gave Himmler and opportunity of exercising his bureaucratic powers.

The Nazi Party had extreme racial policies including the fact that inferior ethnic groups did not deserve to live. This led to Hitler’s decision that Jews living in Europe should be exterminated. During this time, Heinrich Himmler was in charge of such executions. He hastened the process of killing the Jews.