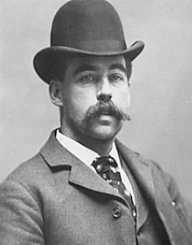 H. H. Holmes was an American serial killer who lived in the late 1800s.

H. H. Holmes was born in New Hampshire on May 16, 1861. He was the second last child in the family of four children. He was the son of Levi Horton and Theodate Page Mudgett. At birth, he was named Herman Webster Mudgett. He adopted the alias Henry Howard Holmes during his university days. He grew up in a wealthy family. He had all the luxuries of a wealthy child.

Despite that, Holmes was a psychologically disturbed child. His father was an alcoholic and violent to his children, Holmes was bullied at school and in the neighborhood. He was a bright student in high school. He was interested in human anatomy from his childhood. He began operating small animals to see their internal structures. As he grew older, he was attracted to the human skeletal structure. Holmes was much interested in dead bodies.

He graduated from high school at the age of 16 and enrolled for a degree. He studied at the University of Vermont. He transferred to the University of Michigan. In 1884, he graduated from college with a degree in Human Medicine and Surgery. During his days in college, Holmes stole money from insurance companies through fraudulent claims. He picked cadavers from the school laboratory, disfigured them to appear as they were accident victims. He registered insurance policies for each of the bodies prior to planting them at the purported scene of the accident. Holmes lodged insurance claims once the bodies were found.

He left the medical school and did some odd jobs for two years. He moved to various cities including New York. He adopted his new name Henry Howard Holmes and added the prefix Dr to it. In New York, two boys disappeared, and one was found dead. He was questioned for the disappearance of two boys and subsequent death of one. Holmes denied any involvement in the two cases. He moved to Chicago in August 1886.

He was employed by a couple to work in their drugstore. Holmes served the Houston couple well in the first months of his employment. Afterward, Mr. Houston disappeared without a trace. Holmes bought the store after Mrs. Houston decided to sell it. He operated the store for a while. Mrs. Houston like her husband disappeared without a trace. He abandoned the drugstore enterprise after some time.

Holmes purchased land and erected a three-storied hotel meters across the drugstore. He called the hotel World’s Fair Hotel. He envisaged hosting most of the people who traveled to the Columbian Exposition in 1893. The local resident of Chicago called it The Castle. Inside the hotel, Holmes created a maze of deceptive structures. He made the interiors extremely hard to navigate unless guided by the host. It had dead-end hallways, deceptive doors, and non-existing exit doors. Only Holmes had a sense of navigation in and around the hotel.

He opened the hotel for accommodation in 1983. After the Columbian Fair ended, Holmes opened the hotel for the locals. He enticed his unsuspecting victims into the hotel rooms and killed them. He was handsome, well mannered, highly educated, and wealthy. He easily lured female victims to their death. He used various methods to kill his victims. He would hang, suffocate, or starve them of food and thirst in the tightly concealed rooms. Since only Holmes knew the elaborate way out of the maze hotel, no victim escaped. He buried the victims or dismembered the bodies and sold the parts to medical schools in his scams.

He continued with his scams including planting fraudulent insurance claims. His major ally in the insurance world was Benjamin Pitezel. The two associates staged a fake life insurance claim of USD 10,000 on Pitezel. Holmes killed his associate and took the money. He also killed the five children from the Pitezel family, leaving no claimant.

On November 17, 1894, Holmes was arrested in Chicago. The police worked on the testimony of one of his insurance associates in jail. He was charged with insurance fraud. When the police investigated the hotel, they uncovered the worst scenario. They found human corpses, skeletons, and other dismembered bodies.

He confessed to killing 27 people in his courtroom testimony. Only nine of the said murders were confirmed. Holmes was convicted of his own testimony and sentenced to hang. On May 7, 1896, he was hanged in prison. The hotel was razed down by a mysterious fire in 1895.

Holmes had three marriages. He married Clara Lovering in July 1878. They got a son named Robert Lovering Mudgett. On January 28, 1887, he married Myrta Belknap. He fathered a daughter with her. He married Georgina Yoke on January 17, 1894. He stayed married to the three women without their knowledge.

Holmes became a national figure for all the wrong reasons. He was the first serial killer to be publicized in the USA. He was shadowed by other cases of serial killers.

Several books have tried to serialize the life of Holmes including the torture doctor published by David Franke in 1975. H.H. Holmes: America’s First Serial Killer is a movie produced in 2004.