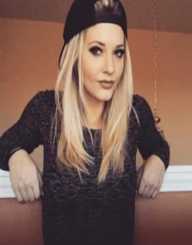 Born October 24, 1997, Griffin Arnlund is an American rising social media personality and model. She came to fame with her YouTube channel Griffin Arnlund which gives tutorials on fashion and beauty. The 19 year old rising sensational also uses her channel to advocate against bullying and share daily life stories. According to her, the anti-bullying campaign is very important for her because she has had that experience in the past especially during her 10th grade. Hence the initiative to end domestic violence and sexism. The Griffin Arnlund which started in 2013 currently as over 300,000 subscribers and hundred of thousand video views. Aside from her own channel, she is part of the collaborative channel The Rad and Reckless which also has over 60,000 subscribers. She also has an Instagram and Snapchat account.

Griffin Arnlund was born on October 24, 1997, in Montana, United States. The family moved to Scottsdale, Arizona when she was in 6th grade to continue her education. They then moved to Los Angeles, California to achieve her career goals.

Griffin Arnlund first announced her presence on social media through an Instagram account “Griffinarnlund”. The account now has over 450,000 followers and counting and is up to date her largest platform in terms of followers. She then explored other social media platforms like YouTube, Twitter, and a Snapchat account. Her YouTube channel  Griffin Arnlund was created in 2013 immediately caught attention and had a substantial number of followers. She later joined the YouTube collaborative channel The Rad and Reckless. On her channel, she gives tutorials on fashion and beauty tips and some personal daily life stories. She gets her fans eagerly waiting for what the next video as she extensively exhausts each topic she chooses.

Griffin Arnlund also uses the channel as an anti-bullying platform when she speaks against social violence and sexism. Arnlund is very passionate when addressing such topics because she was once a victim of such acts.  According to her, she suffered greatly from bullying during her 10th grade that made feel hopeless and ashamed of herself. She had to redraw from school because of the act to complete online. Arnlund after her recovery embraced the need to stand up to anti-bullying hence her advocacy through the channel to stand up for herself and others. The up and coming internet star has a pretty good advice for starters. She encourages all, especially girls who want to venture into social media to just go in for it. She, however, entreats starter to be consistent with their posting and be positive with their comments.

Griffin Arnlund is currently in a relationship with fellow YouTuber Mikey Murphy. The young lovers pictures are mostly shared on Arnlund Instagram account. Their relationship might have started earlier 2015 because she first posted a boyfriend tag with him on YouTube in December 2015. Arnlund picks some inspiration from Selena Gomez who she has been watching since childhood and also Cara Delevingne for her modeling career.