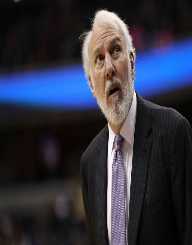 Born on January 28, 1949, Gregg Charles Popovich is a professional basketball coach. He is the head coach of the National Basketball Association (NBA) team San Antonio Spurs. Also known as the “Coach Pop”Popovich is the longest-serving coach in the NBA and other major leagues in the United States after taking over Spurs in 1996. He is regarded as one of the greatest coaches in the history of NBA.

Gregg Popovich led Spurs to five NBA championship wins in 1999, 2003, 2005, 2007, and 2014. He has the record of winning 21 consecutive seasons to best the former record hold by Phil Jackson. Being the longest serving coach in the league, he is one of the nine coaches who has won more than 1,000 NBA games.

Gregg Popovich was born on January 28, 1949, in East Chicago, Indiana. He is of a Serb and Croatian descent with his father being a Serb and mother a Croatian. Popovich loved basketball from childhood playing Biddy Basketball. He was a member of the 1960 Gary Biddy Basket Ball All-Star Team that placed third in the World Tournament. Popovich had his education at the Merrillville High School and continued to the US Air Force Academy.

While there, he was very active in basketball becoming the captain of the school’s basketball team in his senior year. He was the leading scorer during the 1969-1970 basketball season. Gregg Popovich graduated with a degree a degree in Soviet studies in 1970. Popovich later received his master’s degree in physical education and sports sciences at the University of Denver.

After receiving his first degree, he submitted himself for an Air Force intelligence gathering and processing training. After that training, Gregg Popovich enrolled for his five-year compulsory service in the United States Air Force. While there, he toured the Soviet Union and Eastern Europe as a member of the US Armed Forces Basketball Team. He became the captain of the team in 1972, leading it to win the Amateur Athletic Union championship.

In 1973, Gregg Charles Popovich received an appointment as the assistant coach of the Air Force Academy working under head coach Hank Egan. He served in that capacity for six years. In 1979, Popovich left the Air Force team to become the head coach of Pomona-Pitzer men’s basketball team. He will remain there until 1988. There, he led the team to its first outright title in 68 years.

In 1988, Gregg Popovich left for Antonio Spurs to work under Coach Larry Brown as a lead assistant coach. He worked there until 1992, when the owner of Spurs, Red McCombs fired the entire coaching staff. Popovich briefly became an assistant to Don Nelson at the Golden State Warriors in 1992.

In 1994, Peter Halt purchased San Antonio Spurs and appointed Gregg Popovich as the general manager and Vice President of Basketball Operations. Popovich’s first signing was Avery Johnson as the team’s starting point guard and the trading of Dennis Rodman to the Chicago Bulls. After a poor start in the 1996-1997 season, Popovich sacked the coach Bob Hill and appointed himself as the coach. Spurs had a tall injuries list and only managed to win 20-62games. In 1999, he led Spurs to win their first NBA title. Feeling comfortable as a coach, Popovich resigned from his position as general manager and was replaced by R.C. Buford.

In 2002, Gregg Charles Popovich was part of the coaching staff for the US national basketball team during the FIBA World Championship. He was also part of the coaching staff during the 2003 FIBA America Men’s Olympic Qualifying Tournament and the 2004 Olympic Games. The US team won a bronze medal in the latter event. Popovich took over theU.S. men's national team from Mike Krzyzewski after the 2016 Olympic Games.

Gregg Popovich is married to Erin with two children. He is an outspoken person and constantly has criticisedPresident Donald Trump behavior and un-presidential utterances. He also speaks on social justice issues lending support for the Women’s March.

Gregg Popovich is very active in humanitarian works. He spends a lot of time and money in various charity works. He is involved with non-profit organizations like the San Antonio Food Bank and Innocence Project.

Gregg Popovich was involved in Shoes That Fit; aimed at providing students of Gate Elementary School with more than 200 shoes. He has also been involved in other charity works.