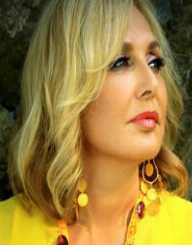 Faegheh Atashin known by her stage name Googoosh (Swan Bird) is Iranian actress and singer. Born on May 5, 1950, she played an instrumental role in the Iranian pop music making her one of the famous female pop singers in the Persian-speaking region. She achieved fame and success in the music industry at the latter part of the 1970’s. Being a multilingual Googoosh made recordings in English, French, Italian, Spanish, Persian, Turkish, and Azerbaijani.

As an actress, she starred in many Persian movies from the 1950’s to 1970’s. Googoosh went on hiatus during the Iranian Revolution when female singers were ban from performing. However, she remains relevant in the music industry and has lots of followers inside and outside her country. She recently collaborated with the singer, Hassan Shamaizadeh, for the song Hayahoo in the 2012 album Ejaz. Googoosh is also a judge for the reality show Googoosh Music Academy. The show is broadcast on Manoto 1, a London based satellite channel.

Faegheh Atashin aka Googoosh was born on May 5, 1950, in Sarcheshmeh Street, Tehranto Nasrin, and SaberAtashin. Her father is an Iranian, comedian and entertainer and her mother, an Azerbaijanis. He biological brother died of heart rheumatism at age 25. She has five other half-siblings, three on her father side and two by her mother. As a young child, Googoosh used to mimic some famous singers at the time. Her father discovered her singing and acting talent, and at the age of three, she was already on the stage performing for money. Due to this, she did not have any form of primary education.

Having a very early career, Faegheh Atashin aka Googoosh became very famous and thrived as a pop singer in the 1970’s. She did not catch the attention of only Iranians but also other pop-loving fans in the Persian region and other Asian countries. She was known for her fashionable outfits and trademark hairdos. Many Iranian women followed her footsteps regarding fashion especially with her hairstyles and she detected the pace.

Googoosh released albums like Do Panjareh (Two Windows), 1970, Mordâb (The Swamp), 1971, Kuh (The Mountain), 1972, Do Mâhi (Two Fish), 1974 and Dar EmtedâdeShab (Along the Night), 1977. Others include NimehGomshodeh Man ("My Lost Half"), BehtarinFasl-e-Tâzeh ("The Best Fresh Season"), Setâreh (The Star), Man O GonjeshkâyehKhuneh (Me and Sparrows of the Home) and LahzehBidâri (Awakening Moment) or Hamzad (Soulmate).

Her talent broke barriers, gaining the attention of the royal family. Aside from singing, Googoosh also starred in many movies. At the age of 10, she played a role in The Runaway Angel, 1961. She starred in other films including Bita, 1972, Fellow Traveler, 1975, Honeymoon, 1976 and Along the Night in 1978 among others. Googoosh acting career ended abruptly during the Iran Revolution in 1979. She went into total hiatus during this era.

During the Iranian Revolution, Faegheh Atashin aka Googoosh briefly left Iran for Los Angeles, where she stayed for few months and returned to Iran. She rejected many offers to record outside Iran although female artists were banned from performing.

Faegheh Atashin aka Googoosh finally returned to the music scene during the presidency of Mohammed Khatami post the Revolution. Her first public performance outside Iran was in 2000 during the Comeback Tour. Her first concert was at the Air Canada Centre in Toronto on July 29, 2000. That year, the documentary Googoosh: Iran’s Daughter was released. It featured her life as a singer, iconic status and other related issues including the turnout of the 1979 Iranian Revolution.

Coming out of Hiatus in post-2000, Googoosh has embarked on numerous world tours and concerts in different countries. She has performed in Canada, Australia, England, United States of America, Germany, France, United Arab Emirates and many others. Googoosh came out with her 6th studio album, Ejaz in 2012. The album featured Iranian singer/songwriter Hassan Shamaizadeh, BabakSaidi, RahaEtemadi, AlirezaAfkari and RoozbehBemani.

Googoosh was the head of the academy, and head judge for the reality show Googoosh Music Academy in 2011. The show that lasted for three seasons was broadcasted on Manoto 1, a London-based Iranian satellite channel. Being outspoken on human rights, she released a video to support the LGBT community in Iran in February 2014. She released her 7th album AkseKhosoosi (Private Portrait) on March 21, 2015. The album billed other songwriters and composers like Babak Amini, BabakSahraee, and Nickan. She is currently on other projects.

Faegheh Atashin aka Googoosh has married four times first to Mahmoud Ghorbani, a music promoter in 1967. Although she married him against her will to pay accumulated debts, Ghorbani played an instrumental role in her music career. The couple had a son, Kambiz, who is also into music. They divorced in 1972. Faegheh Atashin aka Googoosh went on to marry an Iranian actor, Behrouz Vossoghi in 1975 but divorced 14 months later. Her next marriage was to HomayounMestaghi, who she had dated in the late 1970’s. They finally married in 1979. After some years of marriage, they divorced in 1985. Googoosh last known marriage was to director MasoudKimiai in 1991, but that also ended in 2005.

Googoosh served a jail term in Iran for about a month in 1980.

Googoosh has won many awards including Best Actress at the Iranian Sepas Film Festival, 1993, Best Iranian Female Singer at the World Music Awards, 2014 and Best Music Video For Do Panjereh at the Prestigious Film Awards March 2017.