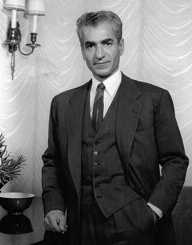 The Shah of Iran AKA Mohammad Reza Pahlavi was born on October 26th, 1919. His place of birth was in Tehran. His father was called Reza Pahlavi while his mother went by the name Tadjol-Molouk. He was the eldest son of his parents, and this made him the firstborn son of the first Shah belonging to the Pahlavi dynasty. At the age of five, his father relied on the British assistance to overthrow Qajar Dynasty. This was the time that his father formed the Pahlavi Dynasty hence becoming the first Shah from this dynasty.

He was crowned the prince in 1926 after his father was coronated. He also went for his studies overseas at the Institut Le Rosey in 1931. Years later, in 1936, he completed his high school education and went for his military training in Tehran.

In 1941, Mohammad Reza was crowned as the new Shah of Iran following his father’s failure on the throne. Later on, after World War II came to an end, Britain and the United States withdrew from Iran. Nonetheless, the Soviet Union did not do this. Reza relied on American help to force the Soviets out of their settlements in Iran.

It is during his tenure that Reza formed the White Revolution. This revolution brought several changes to the land of Iran including nationalizing forests, water, liberalizing women, developing forces and sanitation. With time, Reza expanded dictatorial powers as he abolished a multi-system party in his country. He only allowed his party, i.e., Rastakhiz Party to exist. This led to a revolution that would bring an end to his autocratic style of leadership.

In late 1978, Reza’s troops were out in the streets opening fire on religious protesters. This led to the death of many individuals. Through this occurrence, his tenure weakened as he earned himself enmity with many people. The following year, an active revolution that was led by Ayatollah Ruhollah Khamenei forced him to flee the country together with his family.

In 1939, Mohammad Reza wedded the daughter to the king of Egypt named Dilawar Princess Fawzia. This couple welcomed one child in their family. She was called Princess Shahnaz Pahlavi. Reza and his wife later separated.

Mohammad Reza, the Shah of Iran suffered from a form of blood cancer. This contributed to his death on July 27th, 1980. He passed away at the age of 60.