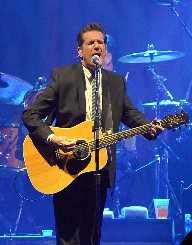 Glenn Frey was the co-founder of the most influential bands in the rock industry. He was also a distinguished guitarist who played with his heart and soul. His demise recalls and concludes the anthology of one of the most envied rock singer teams. For many of us, it indicates an unspecified amount of memory. His band, The Eagles, released ‘Hotel California’ song that became the national anthem for the youths in the 70s. For those who grew up in the 60s, have a story to tell behind this huge man.In all, a colossal reminder solely soothes our hearts, all thanks to his ‘Take It Easy’ and ‘One of these Nights’ by The Eagles band. Glenn also appeared in countable films and television episodes.

On November 6, 1948, Glenn Frey was born in Detroit, Michigan where he spent his childhood memories in Royal Oak., Michigan. In his early years, Frey showed remarkable interest in music. At five years old Glenn went for piano lessons, and in the process, he also gained guitar skills. In the middle of 1960s, Frey enrolled at the Detroit rock scene. Here he created his first and newest band titled as ‘Subterranean. The group included his High School fellows from Dondero High School such as Jeff Hodge and Bill Barnes.

Early in 1966, Glenn Frey founded another band which he named as Mushrooms in partnership with His former members. Within a year Bob Seger helped his team to secure a long-term deal with Hideout Records. Within a short period, the band became visible on television where they marketed their newest single- Such a Lovely Child.

The Mushroom band parted ways, and Glenn managed to join one of the local bands known as ‘The Four of Us’ for some time. In the mid of 1967, Glenn founded the Heavy Metal Kids group in collaboration with quintet members. With the help of his guitar skill, Frey launched his hit single titled as “Ramblin’ Gamblin’ Man.” He later moved to Los Angeles in 1969 and met with J.D Souther. In no time he premiered as a songwriter of the ‘Longbranch Pennywhistle.'

Glenn Frey became a television actor where he starred on Miami Vice episode as well as the ‘Smuggler’s Blues.' He also appeared as the leading role in one of the American TV series ‘South of Sunset’ in 1993.From 1996 to 2001 Glenn starred on HBO’s Arliss and also acted a couple of films like Jerry Maguire and Let’s Get Harry.

As time passed, all went well for the Eagle’s band. In 1998 they received five American Music Awards followed by six Grammy Awards. In 1983 Glenn Frey married Janie Beggs till 1988. He later married Cindy Millican in 1990. The couple was blessed with three children; two sons and one daughter. Starting 2000 Frey’s health began to deteriorate when he was diagnosed with rheumatoid arthritis. According to the medical report, the treatment went further to pneumonia and colon inflammation. In 2015, he went through several abdominal surgeries where he was kept in a medically-induced coma. He was pronounced dead on January 18, 2016, in New York at 67 years old while he was recovering from gastrointestinal tract surgery.