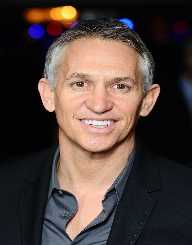 Gary Lineker was born on the 30 November 1960 in Leicester, England. His parents were Margaret and Barry Lineker, and he has a younger brother Wayne.

Gary Lineker was educated a Caldecote Juniors and Braunstone in Leicester. For his high school education, he was enrolled at City of Leicester College in Evington. During his school years, Lineker excelled at both cricket and football. Lineker was the captain of the Leicestershire Schools cricket team. He also played football for Aylestone Park Youth team and joined the Youth Academy of Leicester city in 1976.

Gary Lineker turned professional in 1979 and made his debut in a Leicester City vs. Oldham Athletic. By 1982, he was a regular team member of Leicester City, and in 1985, other clubs were starting to notice his talent. He was sold to Everton for 800,000 pounds and scored 40 goals in 57 games. During 1986, Lineker shot to fame at the World Cup in Mexico with matches against Poland, Paraguay, and Argentina showing his skills as a striker. England ultimately lost the 1986 World Cup to Argentina, but Lineker had made his mark in world soccer. He won the Golden Boot award for the top scorer in the competition.

During the 1986-1987 season, Lineker joined Barcelona. He scored 21 goals out of 40 games in the first season but did not reach this level again during his time with the club. In 1989, he decided to return to English football and had a choice between Tottenham Hotspur and Manchester United. Lineker chose Tottenham Hotspur. In 1991, he was in the team to win the FA Cup Final against Nottingham Forest.

At the 1990 World Cup Lineker helped England make it to the semifinals; but in a close game, where Lineker kicked an equalizing point in the final stages of the game, England lost to Germany. In 1991 FA Cup Final Lineker missed the penalty against Nottingham Forest, but his team went on to win the game.

His final club was Nagoya Grampus Eight in Japan. Lineker joined them in 1992, played twenty-three games and scored nine goals before retiring from the game in 1994.

By the time Lineker retired from football, Gary Lineker had scored forty-eight goals from eight cats and had never been issued with a yellow or red card.

Gary Lineker was one of the best strikers in English football. His final score was forty-eight goals from eighty caps.

Michelle Cockayne and Gary Lineker married in 1986, and they had four sons. They divorced in 2006. Lineker remarried in 2009; his new wife was Danielle Bux. They divorced in 2015. During their time together Lineker and Bux won thirty thousand pounds for charity in a television event: Mr and Mrs (2016).

Lineker appeared on Who Do You Think You Are? A BBC television show which delves into the genealogical history of subjects.

After one of his sons was diagnosed with leukemia as an infant, Lineker and his then-wife, Michelle Cockayne, became patrons of Leukaemia Busters (1994-2005). He has helped many other charities including Leukaemia CARE, the Prince’s Trust, Sports Relief, Book Aid International and Cancer Research UK.

Since his retirement from playing, Gary Lineker has had a successful career in the media. He will be remembered as one of England’s highest football scorers.