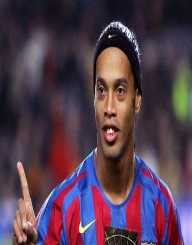 Ronaldo de Assis Moreira is a Brazilian football player. He was born on March 21, 1980, in Porto Alegre, Brazil. His mother was a salesperson until she studied to become a nurse. His father was a shipyard worker and played football for the local club. When Ronaldo was eight years old, his father suffered a heart attack while swimming in a pool.

His brother Roberto was signed by the football club Gremio, where Ronaldinho later started his career. His brother’s football career was cut short due to an injury. He also has a sister. When Moreira was eight years old, he started to show significant skills in football. Since he was usually the smallest kid in the team, he was given the nickname Ronaldinho.

Ronaldinho started his football career with playing for youth clubs. He played organized football, as well as futsal-indoor hard court football. This gave him experience and high control over the ball. His childhood’s brightest game was when he scored 23 goals in a game against a local team. He was not only interested in playing, but also read a lot about Brazil’s football history.

In 1997, he was called-up to play for the Under-17 national team. The team won FIFA U-17 World Championship in Egypt, where Ronaldinho was selected as the tournament’s best player. After this, Ronaldinho was signed with the Gremio, one of the best teams in the Brazilian league.

In his debut year, Ronaldinho and his team won the 1998 Copa Libertadores tournament. The following year he was invited to play for the national team in the Confederations Cup in Mexico. When he established himself as a rising star, Ronaldinho moved to Europe, to play for Paris Saint-Germain team. The following year he participated in his first World Cup with the Brazilian squad. Brazil won over Germany and claimed their fifth World Cup title.

In 2003, Ronaldinho joined FC Barcelona in the Spanish league. He won the No.10 jersey- typically worn by the team’s highest creative player. He won two FIFA World Player of the Year awards (in 2004 and 2005). In 2008, Ronaldinho left Barcelona and joined A.C. Milan. His performance in the Italian club was not as high as previously. He wasn’t even included in the 2010 Brazilian team for the World Cup.

After the downfall in his career, he went back to play for Brazil-Flamengo in Rio de Janeiro. In his first year at the club, the team won 2011 Campeonato Carioca. In 2012, after being absent from a few practices, Ronaldinho sued the organization for not paying for four months and terminated the contract.

After he left Flamengo, Ronaldinho signed a contract with Atletico Mineiro. He had a good season with the club, and the team qualified for the 2013 Copa Libertadores. He was selected as the best player in the league. The next year, he led the team to win the Copa Libertadores. In 2014, the group also won Recopa Sudamericana, after which Ronaldinho left the club.

Ronaldinho was offered contracts from England and newly formed Indian Super League club Chennai Titans. But eventually, Ronaldinho signed a contract with Mexico’s Queretaro. His time with the club was auspicious, and he parted ways with the club in 2015 to play for Brazil’s Fluminense.

Although he signed an 18-month contract, after only two months and nine appearances, the Club and Ronaldinho agreed to terminate the agreement. He later told that he didn’t feel like he was not able to perform as was expected of him.

Ronaldinho is married to Brazilian dancer Janaina Mendes. The couple has a son, Joao, born in 2005. He is close to his family. Ronaldinho’s brother Roberto works as his agent, and his sister Deisi - as his press coordinator.

In 2006, Ronaldinho was one of the highest paid players. He has had endorsements with Nike, Pepsi, EA Sports and Danone. In 2011, he signed a deal with Coca-Cola, but the contract was terminated when he was caught drinking Pepsi in a press conference.

Ronaldinho has been activist for UNICEF and Joint United Nations Program on HIV/AIDS to promote awareness among young people.