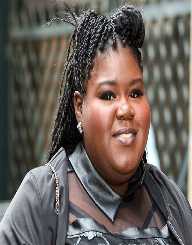 Gabourey Sidibe is an award-winning American actress who was highlighted for her plus size but has recently been seen with a reduction in weight in her recent public appearances. Sidibe made an acting debut playing a role in Precious in 2009. Though it was her first film, her display of talent and real performance gained her a nomination for the Academy Award for Best Actress.

Gabourey Sidibe was born on May 6, 1983, in Bedford-Stuyvesant, Brooklyn, New York to Alice Tan Ridley and IbnouSidebe. Her mother is American R&B, and gospel singer and her father is a Senegalese cab driver. She was raised in Harlem and also lived with her aunt Dorothy Pitman Hughes who is a famous feminist activist. Sidebe had her education at the Borough of Manhattan Community College, City College of New York. She later graduated from the Mercy College.

After school, Gabourey Sidibe worked as a receptionist at The Fresh Air Funds before venturing into acting. Her debut film was in Precious, 2009 where she played the role of Jones, a 16-year-old lady who has been raped twice by her father and each resulting in pregnancy. She now has two children as tries to escape the abuse of her mother. Her display of talent as the main character of the film earned her nominations in the Academy Award for Best Actress and Golden Globe for Best Performance by Actress in Motion Picture Drama. Precious, on the other hand, won an Academy Award, Golden Globe Award and Sundance Film Festival Grand Jury Award.

In 2011 received a role in Yelling to the Sky, playing a role of a bully, Latonya Williams and starring Zoe Kravitz in a film directed by Victoria Mahoney. That same year, Gabourey Sidibe played the role of Odessa Montero in the film Tower Heist and the Showtime network series The Big C as Andrea Jackson.Sidebe continued to exhibit her acting artistic talent in the television series American Dad season 8 in the episode StannyTendergrass in 2013 and joined the cast of the third season of American Horry Story later in April that year.

Gaboury Sidibe had a health issue and had been diagnosed with Type 2 diabetes since March 2017. Due to that, he had undergone a laproscopicbariatic surgery in her bid to lose weight. Her current public appearances show she has lost some pounds.