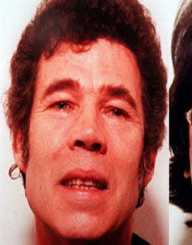 Frederick Walter Stephen West was an English serial killer who committed several horrific murders and sexual assaults in England. Born on September 29, 1941, he committed about 12 murders between the late 1960s and 1980s in Gloucestershire with his second wife, Rosemary West. With all his victims being young females, West raped, tortured, and dismembered their bodies before burying their remains at a cellar or garden the Wests' Cromwell Street home in Gloucester.

Aside from outsiders, West murdered about two of his family members. His wife Rose also killed his stepdaughter, Charmaine. In 1994, West and Rose were arrested and charged. On January 1, 1995, West hung himself and died, while awaiting trial at HM Prison Birmingham.

Frederick Walter Stephen West was born on September 29, 1941, at Bickerton Cottage, Much Marcle, in Herefordshire. He was born to an overprotective mother, Daisy Hannah Hill, and a disciplinarian father, Walter Stephen West. He had six other siblings. Being his mother’s favourite, West depended on his younger siblings for companionship.

He dropped out of school at age 15 to work as a labourer at Moorcourt Farm. According to West, his mother introduced him to sex at age 12, engaging in bestiality and believing incest was normal due to his father’s incest with his daughter (West’s younger sister). Fred had a motorcycle accident at age 17, sustaining injuries in the skull, broken leg and arm, and went unconscious for seven days. Two years later, he fell two floors off a fire escape outside the Ledbury Youth Club, causing another head injury.

Aside from his bad behaviour towards young girls outside the home, Fred West had been raping his 13-year-old sister Kitty and had her pregnant. Kitty reported the issue to the family in June 1961, leading to his arrest and later trial at Herefordshire Assizes on November 9. The case closed after Kitty refused to testify. However, West’s mother banished him from home, and most of the family members severed their ties with him. He left home for the Much Marcle house.

In November 1962, Fred West married Rena Costello, who was at the time pregnant from a Pakistani bus driver. West and Rena first met in 1960, dated for months before she returned to Scotland. Rena gave birth to a daughter, Charmaine in March 1963. Fred and Rena’s daughter Anna Marie was born in July 1964. The couple later had a strained relationship with Rena, leaving home in 1968, leaving the children in the care of West.

Fred West married Rosemary Lett on January 29, 1972. The couple moved to Midland Road, near 25 Cornwell Street. Fred later bought the property for £7,000 from the council. West and Rose had a daughter Mae June. Rose engaged in prostitution, and by 1983, she had eight other children, with about three of them coming from her prostitution. West and Rose also subjected their children to sexual molestations. They tortured them severely when they resisted. Anna Marie managed to escape from home.

In 1967, Fred West killed his lover and nanny of his children Anne McFall, who was at the time eight months pregnant. In June 1994, her mutilated remains were found buried at a cornfield between Much Marcle and Kempley with her unborn baby cut from her womb. Rose is believed to have murdered Charmaine West while her husband was serving a prison term. Her body was initially stored in the coal cellar of Midland Road. After West was released on June 24, 1971, he buried her in the yard close to the back door of his flat.

To prevent Rena from blowing alarm on the where about of her daughter, Charmaine, Fred West strangled her to death. Her body was severely dismembered and stored in a plastic bag. She was buried near a cluster of trees known as Yewtree Coppice at Letterbox Field. Around April 20, 1973, the couple murdered 19-year old Lynda Gough, who had frequently visited their home to have an affair with two lodgers. Her remains were buried in an inspection pit beneath the garage of their home.

Their next murder was their child Heather West, who had revealed his parent's sexual immoralities to her friends and school make. Other victims include 15-year old Carol Ann Cooper, Lucy Partington (21), Thérèse Siegenthaler, (21), Shirley Hubbard, (15), Juanita Mott, (18),  Shirley Robinson, (18), Alison Chambers, (16). Most of the victim’s remains were found in the cellar at Cromwell Street.

The police had been informed by Heather's disappearance by her siblings. This was because Fred West and Rose had been contradictory in their story to the children of the where about of Heather. On February 25, 1993, West confessed to the police he had killed Heather and her remains stored in a dustbin. He had later buried her in the garden. The police excavated and found Heathers remains. Furthers excavations discovered the remains of many other victims.

Fred West sought to exclude Rose from all the murders. However, the police arrested Rose on April 20, 1994. They were jointly charged with five counts of murder on May 6. Rose pleaded not guilty. West was sent to Birmingham Winson Green Prison. He later changed his statement and indicted Rose as being part of all the murders except that of Anna McFall. West committed suicide on January 1, 1995, by asphyxiating himself in his cell. Rose was sentenced to life in prison on November 22, 1995, on ten counts of murder despite her continued protest of innocence.