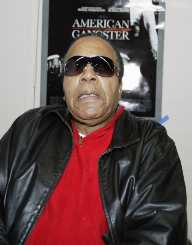 Frank Lucas was born 9th September 1930, to Fred and Mahalee Lucas. He was born in La Grange, North Carolina, in the United States. Lucas started a life of petty crime from a young age. After a fight with a former employer, his mother urged him to go to New York City to escape the situation. Once he was in New York, he was soon involved in petty crime again.

Frank Lucas was supposedly taken under the wing of Bumpy Johnson, a local gangster. His years spent with Johnson have since been questioned by Johnson’s widow. Lucas soon came to an understanding that he would have to somehow break the monopoly held by the Italian Mafia if he was to be successful in New York. He traveled to Thailand where he met up with a distant relative named Leslie “Ike” Atkinson, a former sergeant in the U.S. Army.

The Drug Enforcement Administration had nicknamed Atkinson, “Sergeant Smack”. Atkinson supplied Lucas with drugs that Lucas smuggled into the U.S. Rather than have middlemen, Frank Lucas sold the drugs himself.

He enlisted help from very close family and friends that he felt he could trust. Lucas claims he was making one million dollars per day selling his drugs, but this was found to be an exaggeration.

Frank Lucas invested his money in real estate, buying properties all over the U.S. This included office buildings in Detroit, and apartments in Los Angeles and Miami. He also had a large ranch in North Carolina where he ran 300 head of Black Angus cattle.

When Lucas was arrested in the mid-1970s, all his assets were seized, as well as his cash holdings in the Cayman Islands.

Frank Lucas house was raided by the Drug Enforcement Administration and Police Department in January 1975. They found over half a million dollars in cash. He was convicted of federal and state drug violations.

Lucas was sentenced to 70 years in prison. Once he was convicted, Lucas gave information that led to over 100 drug-related convictions. In 1977, Lucas and his family went into the witness protection program.

In 1981, both his federal and state sentences were reduced to time already served, and he was given a lifetime parole. Three years later, he was convicted of trying to exchange heroin and cash for a kilo of cocaine. He received a seven-year prison sentence and was released in 1991.

Frank Lucas has been depicted in the media, although the 2007 movie, American Gangster, which was supposed to be about the life of Lucas, has been said to be 99% inaccurate.

Lucas has also been on television. He appeared in the second season of American Gangster, and the first season of Drug Lords on Netflix.

Frank Lucas married Julianna Farrait-Rodriguez. Farrait also went to prison for five years for the role she played in her husband’s business.

When Farrait was released from prison she returned to her home country of Peurto Rico, but the couple reconciled in 2006 and have now been married over 40 years.

In 2010, Farrait was arrested for trying to sell cocaine to an informant of the FBI. Lucas has seven children.