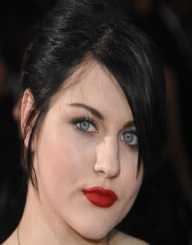 Frances Bean Cobain is the daughter of the late legendary guitarist Kurt Cobain. She is a visual artist and a model.

Frances Cobain was born on August 18, 1992. Her birthplace in Los Angeles, California, and her star sign is Leo. Just after she was born, she was brought into the limelight by the media. This was mainly due to the drug habits of her father Kurt Cobain, and her mother Courtney Love who is an actress. Cobain was taken away from their custody which they won back after a lengthy battle. Love admittedly said to the magazine Vanity Fair that she used heroin while she was pregnant with Frances. This prompted an investigation, and they were declared unfit to care for the child. Cobain, however, maintained that his wife’s words were taken out of context. A lengthy legal battle followed after which they were granted custody of Frances. To help themselves with parenting, they hired several nannies.

Frances Cobain lost her father early when she was almost two years old. In 1994, Kurt Cobain shot himself and took his life. Frances was then raised by her drug addict mother, her aunts, and her grandmother. In 2003, Courtney Love was arrested for drug abuse. While in custody, she took an overdose of painkillers. Thus, Frances Cobain was placed in her paternal grandmother’s cares. Love was able to regain custody in 2005.

Frances Cobain started modeling professionally at 14 years of age. She first appeared in an article featuring children of Rockstars in 2006 for Elle magazine. In 2008, she appeared in the March issue of Harper’s Bazaar. Around this time, she became interested in the visual arts. She also interned for the Rolling Stone magazine in 2008. Cobain first artwork collection titled Scumfuck was displayed at the La Luz de Jesus Gallery in Los Angeles in 2010.

Frances Cobain is also a hobbyist singer and gave her vocals in the song My Space from the album Evelyn Evelyn. Professionally, Cobain has drawn a lot of media attention due to her parents’ popularity. Cobain doesn’t pay much attention to it, however, and says that she wants to make her name in the industry. Her family life has remained an object of media speculation, however.

Cobain’s own life has remained rocky, and her mother’s drug addiction has aggravated the problem. Courtney has lost custody of her several times, and it was even alleged in the media that she was guilty of domestic violence towards her daughter. In 2009, she got a restraining order against her mother, and her guardianship went to her paternal grandmother and her aunt (Kurt’s sister).

A year later, she inherited all the rights to the name of Kurt Cobain and any profits from its usage. She also inherited a major portion of his estate.

Frances Cobain is not a fan of Nirvana’s music and likes Oasis. She became married to musician Isiah Silva on June 29, 2014. They remained married for two years after which Frances filed for divorce in 2016