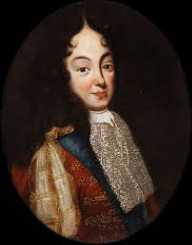 Louis, the eldest son of the Dauphin, Louis and Maria Anna Victoria of Bavaria, was born at the Palace of Versailles in Paris, France on the 6 August 1682. His grandfather, King Louis XIV was still reigning, and his father was the king’s eldest son. Louis was given the title Duke of Burgundy at birth, and he was considered the fils de France, second in line to the throne after his father. His siblings were Philip, Duke of Anjou (b.1683-d.1746) who became the first Bourbon king of Spain; and Charles, Duke of Berry (b.1886-d.1714). Louis was eight years old when his mother died.

Louis Bourbon married Princess Marie-Adelaide of Savoy, the daughter of Victor Amadeus II, Duke of Savoy and Anne Marie d’Orleans. The marriage was arranged under the Treaty of Turin, and the couple was married at the Palace of Versailles on the 7 December 1697.

Louis Bourbon was made part of the High Council in 1702 when King Louis XIV decided that his grandson was ready for the responsibility of dealing with state responsibilities regarding war, diplomacy, and religion. Louis was in command of the French army in Flanders during the War of the Spanish Succession (1708). He was inexperienced in military matters, and Louis Joseph, Duke of Vendome was the second in command.

Conflict arose between the two men and decisions had to be referred to King Louis XIV which led to delays and left the French forces vulnerable. This conflict resulted in the Battle of Oudenarde where Louis’ unwise decisions and refusal to support the Duke of Vendome led to the defeat of the French army.

Louis Bourbon's circle was known as Burgundy’s Faction, consisting of his former tutor Fenelon, Paul de Beauvilliers, Duke of Saint-Aignan and Charles Honore d’Albert, Duke of Chevreuse and Louis de Rouvroy, Duke of Saint-Simon. His circle was in favour of granting more power to the individual provinces as they were opposed to absolute monarchy. They advocated councils and other bodies drawn from the aristocracy. In 1711, his father died, and Louis became Dauphin of France.

Then in February 1712, at Chateau de Marly, his wife died of measles. Louis Bourbon was at his wife’s bedside throughout her illness, was infected and fell ill with the disease. He died on the 18 February 1712, at the age of 29. His eldest son, Louis, Duke of Brittany also fell ill and died on the 8 March 1712. Louis’ other son was two at the time and survived. Phillippe II, Duke of Orleans took over as Regent until Louis XV came of age.