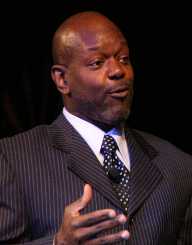 Emmitt Smith III was born on May 15, 1969, in Pensacola, Florida, USA. His parents are Emmitt James II and Mary Smith. He has one sister, Emory.

When Emmitt Smith was a young boy, all he ever dreamed of was being a football star. It was not likely that he would ever accomplish his goals, as he was smaller than many football players and he came from a low-income family. Luckily, he was a hard worker, and he did everything he could to help his family and make his dreams come true at the same time. He might not have known at the time; his dreams would someday come true as a result of his efforts.

Even when Emmitt attended the Escambia High School, he was great in football, even though he didn’t seem like he would be at first. He was smaller than many of the team’s players, so it came as a surprise when he turned out to be as high as he was. He was one of the best rushing yards, running over 100 yards in most of his games. His skill was evident then, and he only improved himself from there on.

After high school, Emmitt attended the University of Florida. While he was at the university, he continued to play football. While playing football, he set a record for rushing 100 yards in his first game. That and other records like it remain unbroken.

When Smith was a junior at the university (1990), he dropped out to play for the Dallas Cowboys, since he had been chosen in the team’s draft. He later returned to the school (while he was still playing football) to complete his degree. In 1996, he graduated with a degree in public recreation.

Emmitt Smith joined the NFL in 1990.  He played for the Dallas Cowboys for most of his career, starting off on their team. Within the first five years, he was able to help led his team towards three Super Bowl victories. After Smith was let go from the Cowboys in 2002, after twelve seasons, he played for the Arizona Cardinals for the last two years of his career.

In both teams, he played running back. During his time on the team, he led the NFL in rushing for four seasons, helped to win three Super Bowls, and played in eight Pro Bowls. By the time he had retired, in 2005 he had rushed over 18,000 yards, 164 touchdowns, and over 4000 carries, all of which are records for the NFL. Years later, in 2010, he was inducted into the Pro Football Hall of Fame.

Emmitt Smith didn’t want to stop working just because he had retired from football. He became a real estate developer in 2005. He teamed up with Roger Staubach, also a football player. Together, they created Smith/Cypress Partners LP. Outside of this company he also developed ESmith Legacy which extends commercial real estate and real estate investments.

After retiring from football, Smith started working on several projects in television. In 2005, he signed on to be a studio analyst on the show, NFL Total Access. In 2007, he appeared on another sport’s show as a studio expert on ESPN.

Outside of sport’s shows, Emmitt Smith appeared on the third Season of Dancing with the Stars with Cheryl Burke. The team ended up winning that season. He was invited back for season fifteen, but he did not win. He also worked as a judge for the Miss Universe contest in 2006. He has also had cameos in shows, including on How I Met Your Mother.

Outside of his win on Dancing with the Stars, the rest of Emmitt Smith’s awards come from his professional football career. Some of his impressive awards are listed below.

Emmitt Smith married Patricia Southall in 2000. The couple has three children together: James Smith IV, Skyler, and Rheagen. He also cares for the daughter of Southall from a previous marriage to Martin Lawrence, named Jasmine Page Lawrence. The family now lives a simple life in Texas.