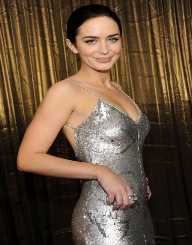 Emily Olivia Leah Blunt was born on February 23, 1983, in Wandsworth, London. She was the second of four children in her family. Her mother Joanna was an actress and later worked as a teacher. Her father Oliver was a barrister. Her grandfather was Major-General Peter Blunt.

Since she was seven years old, Blunt was struggling with a stutter. Her school teacher helped to overcome the stutter until she was 14 years old slowly. Her teacher suggested her to try out a theater to overcome her problems and Blunt became increasingly interested in the art. Later in her life, Blunt became a member of the board of directors for the American Institute for Stuttering. She was educated at the Ibstock Place School and from the age of 16, went to a private school Hurtwood House. Hurtwood House is widely known for its performing arts program. While at school, Blunt was discovered by an agent and began her career.

Emily Blunt made her professional debut in 2001 opposite Judi Dench in Sir Peter Hall’s production of The Royal Family. Blunt was highly praised for her performance and was named the Best Newcomer by the Evening Standard. Her next performance was in the Nicholas Wright’s play Vincent in Brixton at the National Theatre. After this, she played Juliet in IndhuRubasingham’s production of Romeo and Juliet in 2002.

Blunt made her screen debut in the British television drama Boudica in 2003. The same year, she was also cast as the 16th-century queen Catherine Howard in the British television drama Henry VIII, for which she received critical acclaim. Her breakthrough performance was in the drama My Summer of Love, a lesbian love story, where she played Tamsin. That year she was awarded the Standard British Film Award for Most Promising Newcomer with her co-star Natalie Press. Her next television project was the British drama Gideon’s Daughter in 2005. For her performance, Blunt won the Golden Globe award.

In 2006, Emily Blunt made her Hollywood debut in the box-office smasher The Devil Wears Prada, opposite Meryl Streep and Anne Hathaway. For her role as Emily, she was nominated for BAFTA and Golden Globe Award for Best Supporting Actress. The same year she also starred in the drama Irresistible. 2007 was a very busy year for Blunt since she starred in four movies. These were Wind Chill, The Jane Austen Book Club, Dan in Real Life and Charlie Wilson’s War. In 2009, Blunt played Queen Victoria in The Young Victoria. Blunt was the first choice for on Favreau as the Black Widow in Iron Man 2, but due to scheduling conflicts, the role went to Scarlett Johansson.

In 2010, Blunt starred in the horror film The Wolfman along with Benicio del Toro and Anthony Hopkins. In 2011, she was offered the female lead role in Captain America: The First Avenger, but she turned the role down. The same year, she became the ambassadress of the Yves Saint Laurent fragrance Opium. She was also cast in the British comedy Salmon Fishing in Yemen and appeared in Disney’s The Muppets as Miss Piggy’s receptionist.

Emily Blunt began 2012 by starring in The Five-Year Engagement. Before she was working on the movie Looper along with Bruce Willis and Joseph Gordon-Levitt, which was released in 2012. In 2014, Blunt was cast in the film adaptation of Japanese novel All You Need Is Kill- Edge Of Tomorrow. The same year she worked on the Disney’s film adaptation of the musical Into the Woods.

In 2015, Blunt was the female lead in action crime-thriller Sicario. In that year she was named the 98th FHM’s Sexiest Woman of 2015. In 2016, Blunt starred in The Huntsman: Winter’s War and was the lead actress in The Girl on the Train, based on a novel of the same name. She was signed to play the main character in the upcoming 2018 film Mary Poppins Returns, a sequel to the original 1964 film.

Emily Blunt was in a long-term relationship with the Canadian singer Michael Buble, who she met in 2005. They shared a home in Vancouver, British Columbia, but broke up in 2008. The same year, she began dating actor John Krasinski. The couple became engaged in 2009 and married in 2010 in Como, Italy. Blunt and Krasinski have two daughters, Hazel and Violet.

Blunt’s brother in law is her Devil Wears Prada co-star Stanley Tucci, who is married to her sister Felicity. Blunt introduced the couple. In 2015, Blunt became a naturalized American citizen and took the double-citizenship of United States. Despite taking American citizenship, Blunt stated that she does not want to abandon her soul allegiance to Britain.