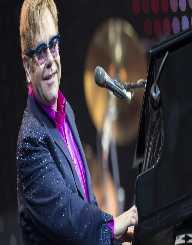 Elton John is an English rock singer, composer, and pianist born on March 25th, 1947. In his over 50 years career, he has sold more than 250 million albums. Among his hit songs include, "Tiny Dancer,"  "Rocket Man," "Candle in the Wind,” and "Bennie and the Jets." Also, John has worked closely with the lyricist, Bernie Taupin. Since 1967, Taupin has helped John in songwriting. Furthermore, together they have collaborated on over 30 albums.

The talented musician realized his talent when he was only three when he started playing piano. In fact, he was presented with a junior scholarship to attend the Royal Academy of Music. During the funeral of Princess Diana in 1977, he gave a touching performance. The following year Queen Elizabeth II made him a knight.

Elton John was born as Reginald Kenneth Dwight on March 25th, 1947. His place of birth is in Pinner,  London, England. He is the first born child of Stanley Dwight and Sheila Eileen. However, he was brought up in Pinner by his maternal grandparents. It was until he turned six that his parents got married officially. At the time, the family had relocated to a semi-detached house that was close by.

Elton John attended Pinner Wood Junior School for his elementary education. Until he was 17, he also attended Reddiford School followed by Pinner County Grammar School. After that, he decided to give attention to his music career against his father’s wishes. For him, h thought his son should consider a serious career in banking.

In 1967, Elton John began his partnership with the lyricist Bernie Taupin. The following year, they switched from Liberty Records to DJM label. They then began writing songs for many artists. The year 1969 marked a huge break for John with his album titled Empty Sky.

In 1970 Elton John released a hit song titled “Your Song." Subsequently, he went ahead to release more hit songs like "Crocodile Rock," "Island Girl,” among others. In 1973, his album Goodbye Yellow Brick Road was released. Later in 1975 he also released another album Rock of the Westies.

In 1976, his song "Don't Go Breaking My Heart," took John to the highest point of his career. The song was among the top ranked songs on the chart during that time. Around this time, he decided to take some break from his music career. Instead, he focused on his soccer team which was in England. He also made public that he was bisexual in 1976. In the 1980s to 1990s, John continued releasing hit songs and had earned many awards in his music career.

In 2006, the legendary musician released The Captain & the Kid.  Later he collaborated with Leon Russell, and together they released The Union in 2010. John also released The Diving Board in 2013. Subsequently, he released Wonderful Crazy Night in 20016 as his 33rd studio album.

Elton John is not only a successful individual in the music industry but also a philanthropist. He has his charitable foundation and also funds other projects as well. For instance, he is a supporter of the Royal Academy of Music and the Globe Theatre

Before Elton John married officially, he was engaged to Linda Woodrow in the 1960s. She was his secretary and his first love. In fact, Elton John mentioned her in his song "Someone Saved My Life Tonight." However, in February 1984, Elton John tied the knot with Renate Blauel.  According to sources, he only married her to cover his homosexuality. Later in November 1988, the couple divorced.  Subsequently, he married for the second time in December 2014 this time to David Furnish. He is a fat5her of two sons, Zachary and Elijah.