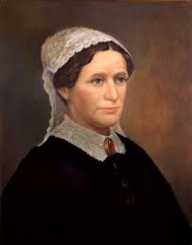 Eliza John was the wife of the 17th President of the United States, Andrew Johnson, and consequently served as the First Lady of the United States. She was the first of six wives of American presidents who were born and raised as an only child. She died while her husband was still at the seat of the presidency from suffering a longtime illness.

Born on October 4, 1810, in Telford, Tennessee, Eliza John was the only child of Sarah Phillips and John McCardle. His father worked as a cobbler and at one point in his life served as an innkeeper in Warrensburg.

Eliza attended the local Rhea Academy in Greeneville, Tennessee, where she learned reading, writing, arithmetic, grammar, spelling and a few other basic courses taught at the time.


The Encounter with the Johnsons and Married Life

On May 17, 1827, a new family moved into the small town of Greenville. The Johnsons relocated to town along with their son Andrew. At the time, the future president of the United States was a tailor looking for work amongst the locals. Upon first glance, Eliza knew she was instantly attracted to Andrew when she first saw him. Soon enough, Andrew found a job in Rutledge and thus began his courtship with Eliza.

It was known that Eliza John taught Andrew how to read, write, and spell, as well as arithmetic, being Andrew not being able to attend proper school when he was younger. After half a month of courtship, the two tied the knot on May 17, 1827, and Minister Mordecai Lincoln presided their wedding. Eliza was 16 at the time of her marriage, while Andrew was 18, and was the youngest First Lady to be wed.

Their union produced five children made up of two daughter and three sons. From eldest to youngest, the children’s names were Martha, Charles, Mary, Robert, and Andrew Johnson Jr.

The Johnsons at the White House

Being a supportive wife, Eliza John urged Andrew to be the best version of himself that he is. She helped develop Andrew’s communication skills both in written and oral form and encouraged him to sign up as a member of the local Greenville College Debating Society. From here, Andrew learned the necessary trade which landed him the position as the leader and spokesperson of the workingman’s party.

Eventually, Andrew rose to the position of Mayor then Congressman and Senator where he resided in Nashville, while Eliza stayed at Greenville and managed their home and finances.

In the duration of Andrew’s political career, Eliza John has only shown herself public for two occasions due to her health condition, suffering from bouts of tuberculosis. Her first appearance was in 1866 at the reception party of Queen Emma from the Kingdom of Hawaii and the second occasion was her husband’s, then US President, birthday party the following year in 1867.

When Eliza John gave birth to her last child, her body then weakened terribly, which made her more prone to disease, especially tuberculosis. She battled with the illness for a number of the year before she finally succumbed to it on January 15, 1876. She died at their home in Greenville, Tennessee at the age of 65, shortly after her husband’s death in less than a year later.