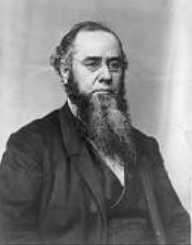 Edwin Stanton was born on December 19th, 1814. He goes down the memory lane as having served as a Secretary of War under two American presidents. He served under Abraham Lincoln in the American Civil War and also served in a similar role under Andrew Johnson.

However, Stanton early years in office post Lincoln's assassination were rough. He disagreed with President Johnson over lenient policies towards the former Confederate States. Johnson attempted to relieve Stanton of his duties. This led to his impeachment by the Republicans.

Edwin Stanton was born on December 19th, 1814. The first born to David and Lucy's children. He grew up in Steubenville, Ohio. He kicked off his formal education at a private school called "Old Academy."

In 1831, Edwin Stanton began his college studies at Kenyon College. He became part of the College's Philomathesian Literary Society and sat on some committees.

His salary from selling books in Columbus could not get him back to Kenyon to complete his final year. He soon went back to study law at Steubenville.

Edwin Stanton advanced his influence into the inner circle of the White House. In 1862, he received an appointment letter as the legal adviser to Simon Cameron. A year later, Cameron resigned, and Stanton appointed the new U.S secretary of war.

Even though Stanton disagreed with Lincoln, he stood by the President's side until his assassination in 1865. After Lincoln's death, he took the lead role in finding the President's assassin. As a result, this pursuit for justice cemented his political control as well as his position.

President Johnson became Stanton's new boss. The two were at odds over the Reconstruction Policy implemented in the South after the civil war. This led to the president's attempt to remove him from office.

The Senate did not support Johnson's actions, and this saw Stanton recalled back to the office. The face-off between the two came to an end when Stanton resigned and went back to practice law.

Edwin Stanton died on December 24th, 1869. This was four days after his appointment to the U.S Supreme Court. He died as a result of respiratory failure at the age of 55.