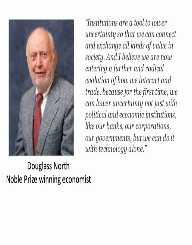 Douglass North was an American economist born on November 5, 1920. Douglass North became famous with his work on economic history. His research and writing also positioned him as an influential figure in the field of economics. In 1993, Douglass North shared the Nobel Memorial Prize in Economic Sciences with Robert William Fogel. The citizen for the Prize read Douglass North and Fogel "renewed research in economic history by applying economic theory and quantitative methods in order to explain the economic and institutional change."

Douglas North was born on November 5, 1920, in Cambridge, Massachusetts. Due to the nature of his father’s job with Metropolitan Life Insurance, Douglass North didn’t stay within one community for long. They moved from one place to the other and had to live in communities like Ottawa, Lausanne, Wallingford, Connecticut and New York City. Douglass North received his education at Ashbury College in Ottawa, Ontario and continued at Choate School in Wallingford, Connecticut. Douglass North then enrolled at the University of California, Berkeley although he was offered admission at Harvard. This was because his father made the head of Metropolitan Life Insurance office on the west coast. Douglass North graduated from the University with a B.A in General Curriculum-Humanities majoring in philosophy, economics and political sciences in 1942.

During the World War II, Douglass North served as a navigator on the Merchant Marine during which he routed between San Francisco and Australia. Prior to the end of the war, he taught navigation at the Maritime Service Officers’ School in Alameda. Douglass North later pursued a Ph.D. in economics at the University of California and completed in 1952.

After his education, Douglass North worked as an assistant professor at the University of Washington in 1952. From 1956 to 1960, he became an associate professor in the institution. While working with the University, he served as the co-editor of Journal of Economic History in 1960 and the same year became a Professor of Economics at the University of Washington from 1960 to 1983.  During this period, he also served as the chairperson of the economics department of the school from 1967 to 79.Douglass North's work in the educational field continued as he worked as a Peterkin Professor of Political Economy at the Rice University in 1979 and later became a Pitt Professor of American History and Institution at the Cambridge University from 1981 to 1982.

In 1983, Douglass North joined served as the Henry R. Luce Professor of Law and Liberty in the Department of Economics at the Washington University in Saint Louis. While there, Douglass North became the director of the Centre for Political Economy from 1984 to 1990. He became an advisor to several governments and served as an expert during the Copenhagen Consensus. Douglass North collaborated with Ronald Coase to co-found the International Society for the New Institutional Economic. Douglass North performed research into property rights, transaction cost and the economic development in developing countries among others.

Douglass North came out with several publications throughout his career including. He also released two papers, including Institutions in 1991, in which he summarised his research on economic and institutional changes.  The second was Transaction Costs, Institutions, and Economic Performance in 1992 in which he explained how institutionsgo into a cycle of change to become efficient over time. His publicationincludesLocation Theory and Regional Economic Growth, Journal of Political Economy,1955,The Economic Growth of the United States, 1961, "The State of Economic History," American Economic Review, 1965, Institutional Change and American Economic Growth, 1971 and The Rise of the Western World: A New Economic History, 1973.

Other works include Growth and Welfare in the American Past, 1974, Structure and Change in Economic History, 1981, Institutions and economic growth: An historical introduction, 1989, Constitutions, and Commitment: The Evolution of Institutions Governing Public Choice in Seventeenth-Century England, 1989 andUnderstanding the Process of Economic Change, 2005. His recent publication was Violence and Social Orders: A Conceptual Framework for Interpreting Recorded Human History, 2009 among several others.

Douglass North died at his summer home in Benzonia, Michigan on November 23, 2015.

In 1991, Douglass North won the John R. Common Award of the International Honors Society for Economics becoming the first economic historian to win the award. He won the Nobel Memorial Prize in Economic Sciences in 1993.