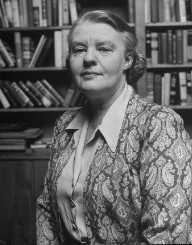 Dorothy Celene Thompson was born 9th July 1893, to Peter and Margaret Thompson. She was born in New York City, New York, in the United States. Thompson had two siblings, a brother, and a sister.

Her father was a Methodist minister, and he was left with the children to raise when his wife died. Thompson was seven at the time. Her father remarried, but Thompson clashed with her step-mother, and in 1908 she was sent to Chicago to live with her father’s two sisters.

Dorothy Thompson studied at Lewis Institute for two years and then moved to Syracuse University. She graduated in 1914 with her degree, after studying politics and economics.

It was a period when not many women had an education, and due to this, Thompson felt morally obligated to take up the cause of women’s suffrage in the U.S.

Soon after she graduated, Dorothy Thompson moved to New York and worked there until 1920, heavily involved with the women’s suffrage movement.

In 1920, Thompson moved to Europe to expand her career in journalism. Her career catapulted when she was the last person to interview Terence MacSwiney. He was one of the leaders of Sinn Fein in Ireland. He was arrested and imprisoned just days after the interview and died two months later.

Dorothy Thompson established a name for herself in journalism, and soon after that, became the Vienna correspondent for the Philadelphia Public Ledger.

During her time in Vienna, Thompson took it upon herself to learn German until she was fluent in the language. She was promoted to Chief of the Central European Service at the Ledger, but she resigned in 1927.

Dorothy Thompson then accepted the appointment of Head of the Berlin Bureau of the New York Post. Thompson was in Germany as the Nazi party took power, and in 1931, interviewed Adolf Hitler for the first time. She was a trailblazer for women, being the first woman to head a well-known news bureau.

When Hitler’s regime was in full power, in 1934, Thompson was asked to explain remarks she had made about Hitler, and she was subsequently the first journalist to be expelled from the country.

After returning to the U.S., Dorothy Thompson started writing a column for the New York Tribune in 1936. The column was syndicated, meaning that over ten million people read it. Thompson then wrote a monthly column for the Ladies’ Home Journal from 1937 to 1961.

Her column in the Home Journal was more of a domestic nature, giving her a break from the heavy news on war and other issues that she usually handled.

Thompson also got involved in radio around the same time, becoming a newscaster for NBC, in a show called On the Record. She started in 1936 and worked in the position for two years.

In 1938, a young Jewish teenager, Herschel Grynszpan, assassinated a small-scale German diplomat in Paris. The incident was used as an excuse by the Germans to go on a rampage which became known as “Crystal Night” where thousands of Jewish businesses, synagogues, and other buildings were trashed and destroyed, and thousands of Jewish men arrested.

Dorothy Thompson took up the cause for Grynszpan, and through her broadcast raised over $40,000 for his legal defense.

In 1939, Thompson was recognized as the most influential and respected woman behind Eleanor Roosevelt in the U.S.

Dorothy Thompson had always been a believer in Zionism, but after visiting Palestine in 1945, she changed her view. This was despite being warned it could affect her professional career, as the media in the U.S. was mostly from the Jewish community at the time.

Her second marriage was to Sinclair Lewis in 1928. Lewis was a recipient of the Nobel Prize in literature. The couple had a son, Michael, in 1930, but they divorced in 1942.

Thompson’s third marriage was to Maxim Kopf in 1943. Kopf was an artist, and the couple was still married at the time of Kopf’s death in 1958. Thompson died on January 30, 1961.