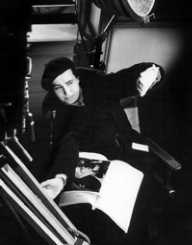 Dorothy Arzner was born 3rd January 1897, to Louis and Jenetter Arzner. She was born in San Francisco, California, in the United States. Her father owned a restaurant, which boasted a clientele of many Hollywood celebrities of the day.

Dorothy Arzner studied at the University of Southern California. She originally wanted to become a doctor and had completed two years of her study when World War I broke out. Arzner worked in the ambulance corps during the war and afterward decided not to go back to her medical studies.

Arzner made a visit to a movie studio, and she decided from then on that she would become a film director.

Dorothy Arzner began her career at Paramount Pictures in 1919, which in those days was known as Famous Players-Lasky Corporation. Her first job was as a stenographer, thanks to a family connection with the director, William C. DeMille. She rose through the ranks, getting a role as a scriptwriter, then being promoted to film editor.

Arzner’s first editing role was for the movie Blood and Sand in 1922, starring Rudolph Valentino. Her work was quickly noticed, and she then got regular work with director James Cruze.

As well as her work with Cruze, Dorothy Arzner had worked on more than 50 movies at Paramount. She told Paramount that unless they employed her as a director, she would move to Columbia Studios. In 1927, Paramount gave the role of director for the movie Fashions for Women, which became a box office success.

In 1929, The Wild Party, directed by Arzner was one of the top-grossing movies of the year. After several more movies, Dorothy  Arzner finished at Paramount to become an independent director.

Arzner directed 25 movies between 1919 and 1943 and was highly acclaimed for her work.

Dorothy Arzner has been awarded a star on the Hollywood Walk of Fame. She was also honored in 1975 by the Director’s Guild of America.

Although Dorothy Arzner was romantically linked with several actresses, she spent 40 years with her partner, Marion Morgan, a choreographer. She died at the age of 82.