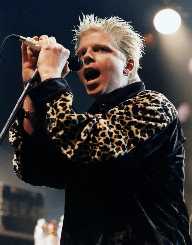 Brian Keith "Dexter" Holland was born on December 29th, 1965. He is an American music artist best known as the guitarist, songwriter and lead singer of The Offspring punk rock band. His band is credited with producing the album Smash (1994).

Holland's band has to date performed on over 1,000 shows and released eight records across the world.

Brian Keith "Dexter" Holland was born on December 29, 1965. He was born in Garden Grove, California and grew up in Orange County. Holland participated in sports and attained excellent grades in high school. Among his favorite punk bands at the time were Aerosmith, Bad Brains, Agent Orange, The Sex Pistols and Circle Jerks.

A heart wrecking riot experience at a show in 1984 changed Holland's life. He had been denied entry into the show. He came together with Greg Kriesel and formed the Manic Subsdial band, which later became The Offspring. Kevin Wasserman and Ron Welty soon joined the two, and they started landing gigs.

Dexter Holland joined Pacifica High School where he graduated in 1984. He came out as the best student in mathematics. Holland then joined the University of Southern California. He attained a bachelors degree in biology and a masters in molecular biology.

He, however, did not complete his Ph.D. because of spending most of his time with The Offspring. In 2013. Holland alongside other authors published an academic paper in molecular biology. This landed him his Ph.D.

Dexter Holland's band signed their first deal and recorded their first album, The Offspring in 1989. His band later collaborated with Epitaph Records to release the Ignition album, 1992 and Smash in 1994.

To date, Smash is the world record holder of most sales of an album on an independent label. In 1996, the band collaborated with Columbia Records to release six albums including the most recent, Days Go By. During live shows, Holland occasionally plays the piano solely when "Gone Away" plays.

Dexter Holland married Kristine Luna, a hairstylist. She too contributed to the ignition album. Luna and Holland divorced in 2012. He then married Amber Sasse, and the couple has two children, Zooey and Layla.