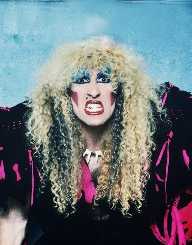 Daniel Snider who become known as the heavy metal singer Dee Snider was born in Massapequa, Long Island, New York on the 15 March 1955. He is the son of Bob and Marguerite Snider and is of mixed Swiss-Jewish descent.

Always interested in singing, Daniel Snider sang in the church choir as a child and was also sang in his high school choir and the All-State Chorus Choir. Snider played in several rock bands before joining an established rock band, Twisted Sister in 1976, singing lead and writing their songs. As well as his music career Snider has hosted Heavy Metal Mania in the 1980s and has appeared on reality television show Growing Up Twisted.

Twisted Sisters first album was Under The Blade (1982). They then released You Can’t Stop Rock n Roll (1983) and their third album, Stay Hungry was published in 1984. By then they were beginning to get noticed and their third breakthrough album, Stay Hungry was released in 1984. Stay Hungry was their breakthrough album and contained the hits I want a Rock and We’re Not Gonna Take It. They found worldwide success and in total, they recorded fourteen albums. The band members trademark look consisted of hair long, heavy makeup and glamorous outfits, coining the term Glam Rock.

Daniel Snider played with various groups during the late 1980s and early 1990s including Desperado and Widowmaker.

During the late 1990s, Snider wrote and starred in a horror film entitled Strangeland (1998). The film did not gain much momentum. He followed the film up with a sequel Strangeland 2. He started hosting a radio show in June 1999, a morning show on WMRQ in Connecticut. Daniel Snider appeared on the Drew Carey Show in 2001 as himself. He was also in the documentaries KISS Loves You (2004) and Metal: A Headbanger’s Journey (2005). He took part in Celebrity Wife Swap in (2012) and in Celebrity Apprentice: Season 6 in 2013.

They shared their family life on Growing Up Twisted, a reality television show that has debuted in 2010.

His mother converted from Catholicism to the Episcopalian faith when Snider as a child and he was raised in that belief.

Daniel Snider has contributed to many causes and charities focusing on children, abuse, emergency services, and women. Charities he has supported include Charity Navigator, March of the Dimes and the National Domestic Violence Hotline. He has been honored for his philanthropic work.

Daniel Snider joined Frank Zappa and others to fight censorship opposition and appeared before a Senate hearing advocating the introduction of content warnings on albums.