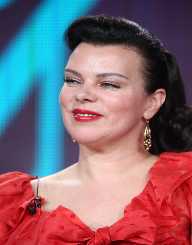 Born on August 13, 1964, Deborah Mazar best known as Debi Mazar is an American actress and television personality. Debi Mazar, who has a long list of movies gained prominence with her role in the Cooking Channel series, Extra Virgin. She is also known as the mean woman in independent films. She also played the role of Shauna Roberts on the HBO series Entourage and TV Land’s Younger; she plays the part, Maggie.

Debi Mazar was born to Nancy and Harry Mazar in Jamaica, Queens, New York. Her father was a Jewish-raised Catholic, and her mother a Roman Catholic turned Judaism, then Buddhist and lastly a Jehovah Witness which she also quit because she accepted a blood transfusion. She worked as a jewellery seller at Fiorucci and also as a dental assistant and a club worker.

Debi Mazar unofficially started a career in the music industry when she worked for Madonna as a makeup artist for the Everybody music video.  Debi Mazar also created the hairstyle and makeup for the play Speed-the-Plow. Soon, she made it into hip pop as a b-girl in New York. In 1984, she made a debut television appearance during a pilot of the hip-pop dance show Graffiti Rock. Having served as the makeup artist for Madonna, she later featured in her music videos like Papa Don’t Preach, True Blue, both in 1986, Justify My Love,1990, Deeper and Deeper, 1992 and Music, 2000.

Debi Mazar then made it into acting playing various supporting roles in films like Goodfellas, 1990, The Doors, 1991, Malcolm X, 1992, Bullets Over Broadway, 1994 and in Batman Forever in 1995. She played a supporting role as press agent Shauna Roberts in Entourage from 2004 to 211. In 2011 Mazar and her family were appearing on Cooking Channel a cooking reality television series which portrays personal life and display their recipes. The show has since its inception had four seasons as at 2014.

Another series of Cooking Channel, Extra Virgin American has been started since 2015. In this new episode, the couple and with their children and family friends travel on road trips around the U.S in search of America’s great food.

Debi Mazar is married to Gabriele Corcos since March 16, 2002. The couple has two daughters and currently lives in Brooklyn, New York. Mazar previously had a long-term relationship with actor Paul Reubens dating back to 1993. In 2014 the couple appeared on ABC’s talk show The Chew to promote the Extra Virgin show.

Debi Mazar is a fan of dogs and has kept dogs like Delores, which she featured during the first season of Extra Virgin. Delores died in 2011.