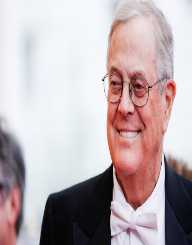 David H. Koch is a great American philanthropist and entrepreneur born in 1940.  He is also a chemical engineer and political activist. He owns Koch Industries together with his brother Charles. It is ranked as the second biggest company in the US among private companies. His father was the founder of the company in 1940. He is the current vice president of the company.  He is the founder of David H. Koch Charitable Foundation. As a great libertarian he tried for vice presidency seat of the US in 1980. David H. Koch was the candidate of United States Libertarian Party. As an Engineer by profession, he has worked in some engineering firms. David H. Koch was ranked number 9 among the richest individuals in the world in 2014.

David H. Koch was born on May 3rd, 1940. His place of birth is Wichita, Kansas in the United States. He is the son of Fred Chase Koch and Mary Koch. During the year of his birth was when his father founded Koch industries. Fred was a businessman as well as and a chemical engineer. He has three siblings Frederick, Charles, and William. While at college Koch was a great basketball player.

David H. Koch graduated from Deerfield Academy in 1959. This is a prep school located in Massachusetts. After graduation, he joined Massachusetts Institute of Technology –MIT.  He studied chemical engineering. In 1962 he completed his studies and attained his bachelor’s degree. A year later he attained a master’s degree.

In the 1960s David H. Koch began his career as an engineer. He worked in a series of consulting companies. Among the companies he served include: the Scientific Design Company, Arthur D. Little, and the Amicon Corporation among others. He then joined Koch industries, their family business in 1970. He started off at their company as technical-services manager with his older brother Charles as the Manager. The company opened a branch Koch Engineering in New York with Koch as the founder. He became the president of the branch in 1970. Koch Engineering changed names to Chemical Technology Group later.

Chronicle of Philanthropy listed him among top 50 philanthropists in the world. David H. Koch also serves in some non-profit organizations.He was honored with prestigious Corporate Citizenship Award in 2004. Woodrow Wilson International Center presented the award. Later in 2005 he was once again presented with a Corporate Leadership award. This was for leading the Memorial Sloan Kettering Cancer Center to great success. In 2007 he received Americans for Prosperity Foundation’s George Washington Award.

David H. Koch is married to Julia Flesher. The couple is blessed with three children.

In 1992 he was diagnosed with prostate cancer. Despite undergoing surgery, radiation and also hormone therapy cancer still returned sometimes.  This cancer experience is what led to the philanthropic man he came to be. He has funded many medical types of research and charitable organizations. He has contributed an approximate of $41 million to the Prostate Cancer Foundation. David H. Koch also contributed $100 million to Massachusetts Institute of Technology in 2007. This was to facilitate the construction of a new research facility especially for researching Integrative cancer. He has since then funded many other research facilities and institutions.