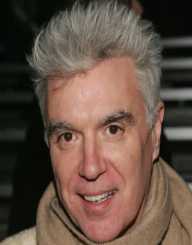 David Byrne is a Scot-American musician and founding member of the American new wave band Talking Heads. Born on May 14, 1952, he was the lead singer, principal songwriter, and guitarist of the band. The multi-talented musician plays several musical instruments and has a distinctive vocal that readily identifies him. Aside from work with the Talking Heads, Byrne also did some solo projects in film, fiction and non-fiction and photography.

David Byrne has won several awards including an Academy Award, Golden Globe, and Grammy Award. He was inducted into the Rock and Roll Hall of Fame.

David Byrne was born to Tom and Emma Byrne on May 14, 1952, in Dumbarton, Scotland as the elder son of two. At age two the family moved to Hamilton, Ontario in Canada. Spending his more aged years there, the family moved again to Baltimore, Maryland, in the United States when Byrne was around eight years. As a young chap, David Byrne learned how to play musical instruments like guitar, violin, and accordion. He was rejected from joining the school choir while in middle school because he used to sing “off-key and was too withdrawn.”

David Byrne then attended the Lansdowne High School in Southwest Baltimore County where he launched his musical career in the high school band called Revelation. He later formed a duo Bizadi with Marc Kehoe between 1971 and 1972. Byrne continued his education at the Rhode Island School of Design in Providence where he met future bandmates Tina Weymouth and Chris Frantz with whom he formed the band Artistics in 1973. He left Rhode for Maryland Institute College of Art dropping out later.

David Byrne left for New York after Artistic was dissolved in 1974. Frantz and Tina Weymouth later joined him to form the band Talking Heads in 1975. In November 1976, the band signed to Sire Records and in 1977 was joined by multi-instrumentalist Jerry Harrison. Talking Heads released an eighth studio album and went into hiatus in 1988. The band was dissolved in 1991. In 2002, Talking Heads was inducted into the Rock and Roll Hall of Fame.

After Talking Heads went on hiatus, David Byrne pursued a solo career releasing his debut solo album Rei Momo, 1989. The album featured genres like Afro-Hispanic, Afro-Cuban and Brazilian rhythms. In 1990, he founded the record label Luaka Bop, which was primarily into releasing Latin American compilations but later included Africa, Cuba, and the Far East music. His next album was Uh-Oh, 1992 followed by David Byrne, 1994, Feelings, 1997. Look into the Eyeball, 2001 and Grown Backwards in 2004.

David Byrne has also done some collaboration with artists like Selena for her album Dreaming of You, 1995. He worked with Brian Eno on his eighth album Everything That Happens Will Happen Today in 2008 followed by the collaborative album Love This Giant with St. Vincent. His most recent work is the album American Utopia released in March 2018.

Being impressed with experimental theatre, David Byrne went into film working with the likes of Robert Wilson, on "The Knee Plays" and "The Forest." He also co-wrote True Stories in 1986. He did the soundtrack for Dead End Kids by JoAnne Akalaitis. He worked with Cong Su and Ryuichi Sakamoto for the soundtrack of The Last Emperor, which won an Academy Award for Best Original Score. The soundtrack Big Love: Hymnal was used for two seasons of Big Love in 2008. He also collaborated with Brian Eno for the soundtrack of Wall Street: Money Never Sleeps.

In 1981, David Byrne briefly dated actress and singer, Toni Basil. That same year, he started dating Twyla Tharp until 1982. During a visit to Japan in 1982, David Byrne met costume designer Adelle Luts and began a relationship. After a long relationship, they married in 1987. The couple has a daughter Malu Abeni Valentine Byrne. They divorced in 2004. Since his divorce, Byrne has dated art curator Louise Neri and from 2007 to 2011 dated artist Cindy Sherman. He held British citizenship until 2012 when he also received a US citizenship. Byrne is an advocate for the use of the bicycle as the primary source means of transportation. He is used to travelling with bikes especially when in New York.