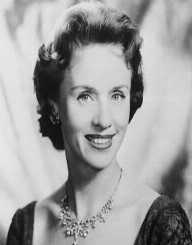 Jessica Tandy is an American actress of English origin who started as a stage actor and became an award-winning film actor.

Jessica Tandy was born as Jessie Alice Tandy on June 7, 1909, in London, England. She was the last child of Harry and Jessie Tandy. Her father worked in the sales department of a rope making company, while her mother headed a special unit government school.

In 1921 she lost her father and grew up under the care of her mother. She went to Dame Alice Owen’s School situated in central London. She enrolled at the Ben Greet Academy of Acting.

Tandy appeared in her maiden play while still at the academy. In 1925 she played a role in The Manderson Girls as Sara Manderson. After the performance, Tandy joined the Birmingham Repertory Theater. She stayed at the Birmingham Theater for four years. In 1929 she joined the Court Theater group. She debuted in the play The Rumor. She continued acting on stage until her exit in 1930.

In 1932 she got invited for her first appearance in the film world. She played a low keyed role of a housemaid in the film The Indiscretions of Eve. She returned back to the stage acting career after her film debut. Tandy had an illuminating stage career in Britain and moved to the US. Notable plays she acted in are French Without Tears, Jupiter Laughs, Portrait of a Madonna, and Honor Thy Father.

After moving to the US, she joined the Broadway Theater in New York. She made numerous appearances for the stage acting group. She had a leading role in the 1947 play A Street Car Named Desire. She won a Tony Award for her character role in the play. In 19511 she acted in another well-received Broadway play titled The Fourposter. She did another role in the 1962 play Big Fish, Little Fish. Other plays worth noting that she appeared in are Hamlet done in 1963 and Three Little Sisters in 1963.

Tandy made her American film debut while still at the Broadway. In 1944 she cast in the film The Seventh Cross. She made a little impact with her role. Tandy got supporting roles in the films that followed. In 1954 she played a minor role in the film The Valley of Decision. She acted alongside her husband in the 1946 film the Green Years. Tandy actually played the role of her husband’s daughter. She completed the 1940s with two other films. Tandy acted in the 1946 film Dragonwyck, and the 1947 production Forever Amber.

Tandy gradually proved herself by getting invitations to play some more significant roles in major films. She had a leading role in the film The Desert Fox: The Story of Rommel. The 1951 film showcased the life of Nazi German military genius General Ervin Rommel in the final stages of WW2. She got leading roles in two other commercially successful films The Light in the forest done in 1958, and the 1963 film production The Birds. Tandy took a sabbatical from Hollywood to concentrate on the Broadway stage. She won accolades during her second stint at the Broadway Theater.

She made a film comeback in 1981 at the age of 72. Tandy featured in Honky Tonk Freeway. She did several films such as The World According to Garp, the 1985 production Cocoon, and the 1987 release Batteries Not Included.

In 1989, Tandy made the most astonishing comeback in Hollywood. At the age of 80, Tandy got a leading role in the film industry that adores young beautiful and elegant women. She played the role of a rich Jewish woman Daisy Werthan in the film Driving Miss Daisy. In 1991 she did another well-acclaimed film Fried Green Tomatoes.

Tandy won the Tony Award four times in 1948, 1978, 1983 and 1994 during her acting career. She is a record breaker being one of the few to win the Triple Crown of Acting title. In 1989 she won three film awards in the same category of Best Actress. Tandy won an Oscar, Tony and Emmy Awards.

She became the oldest recipient of the Best Actress title in the Oscars with her role in Driving Miss Daisy. Tandy was 80 years.

She married Jack Hawkins on October 22, 1932, and divorced on January 2, 1940. She had a single child. In September 1942 she married her actor husband Hume Cronyn. The marriage ended upon her death. She got two children with him.