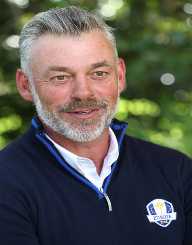 Professional golfer Darren Clarke was born on the 14 August 1968 in Dungannon, County Tyrone in Northern Ireland.

Darren Clarke turned professional in 1990, and his first European Tour took place in 1991. At the 1991 Open Championship, he tied for 64th place and in 1992, on the European Tour he finished No.41. In 1993, he won the Alfred Dunhill Open, and from then onwards his career took off, winning over 21 championships.

Darren Clarke married Heather in 1996, and the couple had two sons, Tyrone and Conor. Heather died in August 2006 from breast cancer. His second wife is Alison Campbell, nee Smyth, a former Miss Northern Ireland whom he married in 2012.

The Darren Clarke Foundation is an organization Clarke founded in 2002 to assist junior Irish golfers. The Foundation also works with Breast Cancer Awareness.