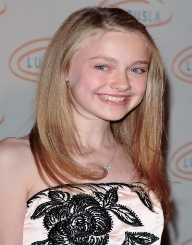 Dakota Fanning is a young American actress who was born on February 23rd, 1994. Her place of birth was in Conyers, Georgia, United States. She began her film career when she was at the age of 5. At first, she majored in commercials before she shifted to big screen movies.

Later on, she worked with Sean Penn and won the Screen Actors Guild Award. She was featured on I Am Sam which was a major hit for her. In 2005, Fanning was featured as Tom Cruise’s daughter while playing the movie War of the Worlds. She also landed a role in the movie series Twilight.

Dakota Fanning is the daughter of Heather Joy and Steven J. Fanning. Both parents were active figures in the sports world. Her mother played tennis professionally while her father played basketball. Fanning is the elder sister to Elle Fanning. She is also a young actress.

Success came to Dakota Fanning in the form of TV commercials that she mainly featured on while she was still young. At the age of 6, there were some programs that Fanning had already appeared on including CSI: Crime Scene Investigation and ER. One year down the line, she won Screen Actors Guild Award for playing I Was Sam in 2001.

In 2002, Fanning was featured in the favorite romantic comedy Sweet Home Alabama. During the same year, she was a minor cast in the miniseries Taken. This was a science fiction TV series. It was around this time that Fanning also featured in other movies including Hansel and Gretel and Trapped.

A year later, she played significant roles in hit films, The Cat in the Hat and Uptown Girls. Animation projects by Disney, Cartoon Network, and Fox also used her voice. In 2004, Dakota Fanning acted alongside the favorite movie celebrity Denzel Washington in the movie Man on Fire. This was just the beginning of her work with top class celebrities.

After this movie, she was considered for the Tom Cruise movie called War of the Worlds. She played the role of Cruise’s daughter. She also acted with Robert De Niro in the movie Hide and Seek during the same period. In addition to this list of A-stars, she played alongside Kurt Russell in the movie Dreamer: Inspired By a True Story.

In 2007, some debates followed Dakota Fanning after being featured in the moving Hounddog. Critics argue that the movie could have had detrimental effects on young Fanning. In fact, some critics were even directed to her parents for permitting her to feature in such sex scenes.

In 2012, Dakota Fanning landed an important role in playing Jane in The Twilight Saga: Breaking Dawn Part 2. In addition to her acting career, Fanning wishes that she would become a director in the future.

Since 2013, Dakota Fanning has been dating Jamie Strachan who is a professional model.

The movie I Am Sam (2001), is what earned Dakota Fanning the Screen Actors Guild Award nominee. She was regarded as the youngest nominee ever in the film industry.