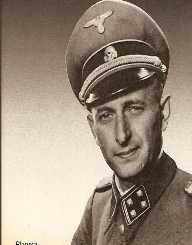 Adolf Eichmann was also known as Otto Adolf Eichmann. He was a lieutenant colonel in the German Army. He is known for his role in planning the Holocaust in which about 6 million Jews we executed. He was handed an assignment to gather information and organize the deportation Jews from the different countries under the German rule in Europe amidst the Second World War. His supervisor Lieutenant General Reinhard Heydrich gave him the order.

He, therefore, planned a sit down for his superior Heydrich and some other heads of various departments in the Germany administration. They met to decide the fate of the many Jews who lived in areas under the German rule. After the leaders came to a final verdict, Adolf Eichmann took it upon himself to ensure that their wishes were executed. He went ahead to send Jews to execution camps whereby they were killed using poisonous gas.

After the end of the Second World War and after Germany was conquered Adolf Eichmann with other officers ran to other countries to hide and they did this using the false identity. Sometimes when they needed shelter, they revealed their real names. The Israeli intelligence service Mossad got a hold of him, and he was executed in 1962 by hanging. He was guilty by an Israel court of crimes against humanity on many accounts.

On March 19, 1905, Adolf Eichmann was born in Solingen, a town in the Rhine Province of Germany. His parents were Adolf Karl Eichmann and Maria Schefferling. His father was a bookkeeper while his mother was a housewife. He had four siblings, and he was the eldest.

His father started to work with ‘Linz Tramway and Electrical Company’ in 1913.he was the commercial manager in the company. Adolf’s family moved to Australia one year later to stay with their father in Linz.There he went to the state secondary school otherwise known as ‘Kaiser Franz Joseph Staatsoper Realschule.’ Adolf Hitler went to the same school 17years before him.

His performance was weak, and so his father decided to transfer him from the state school. Adolf Eichmann was moved to ‘Hohere Bundeslehranstalt fur Elektrotechnik, Maschinenbau und Hochbau’ a vocational school where he left without completing his course. When he left, he worked for a few months at his father's workplace, the‘Untersberg Mining. He then went ahead and joined the ‘Oberosterreichische Elektrobau AG’ in 1925. There he was a sales clerk for two years.

After leaving his sales job in 1927, He became part of the youth wing, among the right-wing veteran’s movement named ‘Jungfrontkampfervereinigung’ in Austria. At the same time, he got a job as an agent for the ‘‘Vacuum Oil Company’ in the Salzburg district an area in Austria. During the weekends after he joined the Nazi party in 1932, he executed his part duties. He also acceded to the SS after seven months.

When the Nazi party took power in 1933, Adolf Eichmann returned home to Germany. Because he was a member of SS, he got through exercise at the SS depot in Klosterlechfeld in August 1933. He was later assigned as the head of seven other members and together they were sent to the Passau border to assist Austrian National Socialists to get into Germany and illegally take misleading information into Austria.

The unit was dispersed In December 1933, but fortunately, he was upgraded to be the SS-Scharfuhrer. This post was similar to that of a corporal or squad leader. He led a troop which took part in the Deutschland division. The team was assigned duty near the next to focus camp at Dachau.

In 1934, Adolf Eichmann became part Himmler’s Security Service called the ‘Sicherheitsdienst’ (SD). They worked on asking and harassing Jews to give up their possessions to Germans. They also forced them to migrate from Germany to other nations.Adolf was upgraded quickly to the rank of a squad leader in 1936. His post was similar to that of a sergeant. He was then raised to become the SS-Hauptscharfuhrer in 1937, a position identical to that of a second lieutenant

He went to Egypt in 1938 to agree on the issue of flight of Jews to that country; the meeting did not go as planned and so there was no agreement. After that, he was transferred to their branch in Vienna to assist in organizing for the Jewish mass departure of which the process had already begun in1938.

The Second World War kicked off in September 1939; this provided Adolf Eichmann with an opening to arrange for the Jewish people to be moved to inferior settlements in capital cities. The Jews were also to be transferred to Poland and Madagascar as planned.Adolf was made the leader of section IV D4 in charge of Clearing Activities of the RSHA in 1940 and then proceeded to lead the department IV B4 of Jewish affairs in March 1941. This position was after he left the ‘Sicherheitsdienst’ to the Gestapo in 1939. Under his new job, he was able to deport about 7,000 Jews to France.

In 1941, he became the Lieutenant Colonel. It was during this period that there was an attack on the Soviet Union.January 20, 1942, there was a Wannsee Conference where Adolf Eichmann was handed the primary assignment to deport Jews to execution camps where they could be murdered in gas chambers. This act was considered the final solution to the problem they had with the Jews.

In 1944, Germany attacked Hungary. Adolf Eichmann was at the forefront in charge of deporting about 437,000 Jews from Hungary to Auschwitz and other full camps for execution.He was finally taken into custody by his collaborators when Germany was conquered in 1945. However, he flew to Austria in 1946.He stayed in Austria for four years and then moved to Argentina to hide under a false identity.

Notably, Israeli intelligence service, in the end, had him arrested in 1960. They took him to stand trial in Israel for 15 accounts of offenses. These offenses included crimes against the Jewish people and humanity. He was found guilty of all the charges, and the verdict was to be hanged to death.

Adolf Eichmann married his love Veronica Liebl on the 21st March 1935. Together they had for kids, all sons; these were Klaus, Horst Adolf, Dieter Helmut and Ricardo Francisco.

Adolf Eichmann was responsible for killing about 6 million Jews and remained unapologetic till his death 1st of June, 1962 when his execution took place.